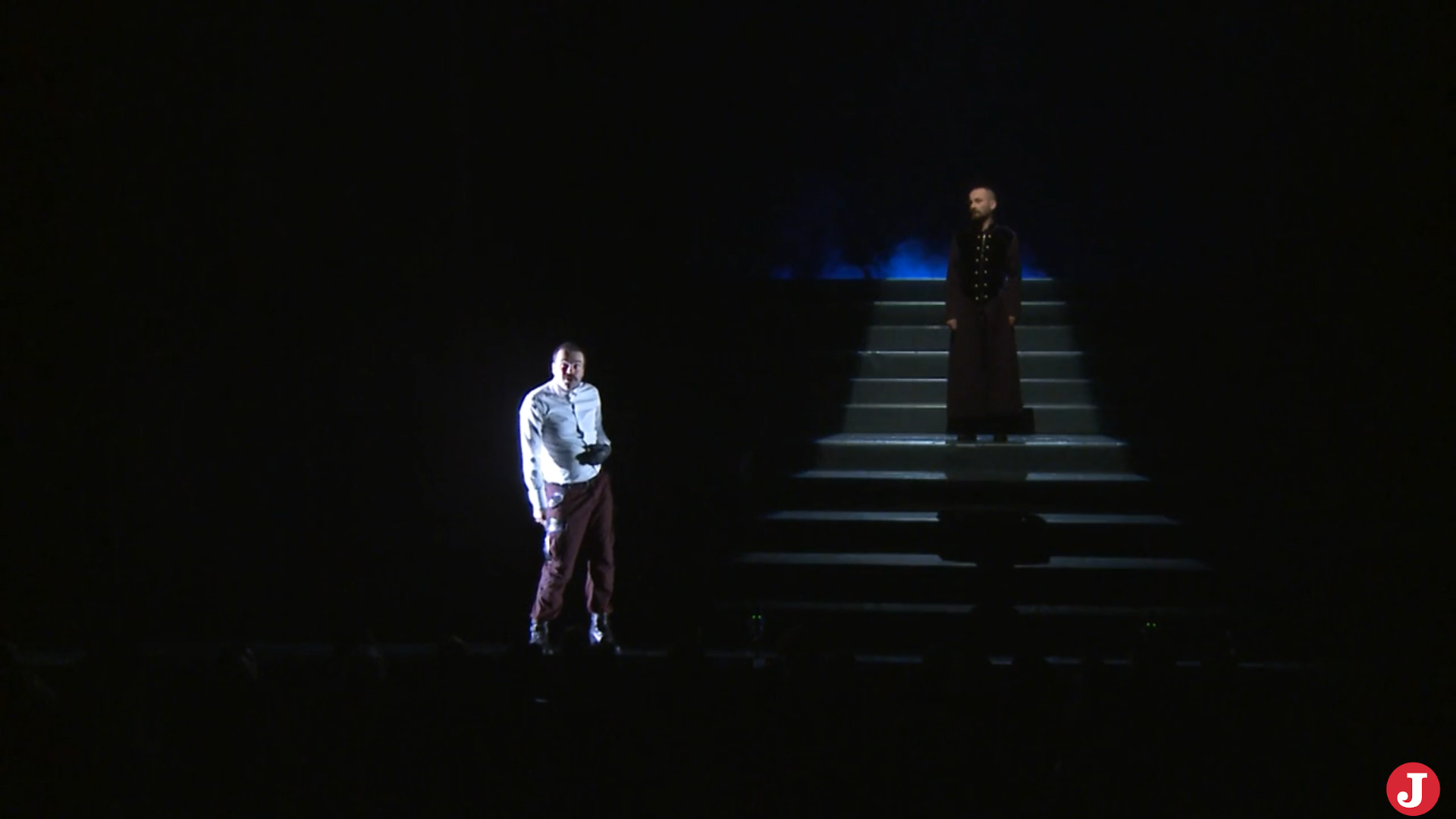 To lay a fact clear at the very beginning, the author of this text has seen Gavella’s Richard III 18 times in total. In the season of 2018/19 it became a sort of pilgrimage for me, to witness this rendering as often as I could, somewhere between owning 3 different editions of Shakespeare’s Complete Works, the desire to revive my first ever witnessing of Shakespeare’s play on stage (Ralph Fiennes as Richard in Almeida´s famed 2016. Production with  Vanessa Redgrave as Queen Margaret) and a keen reverence for the leading man of Alexandar Popovski´s production, Ozren Grabaric, who took the listless hunchback Gloucester under his masterly execution.

Shakespeare's histories show that heavy lies the head that bears the crown, and that is particularly true for one Richard Gloucester who opens up here in a visure of a short, limping, almost childish Grabaric who passes in the parade of dancing court members, namely his mother, his remaining two brothers, the array of people who shun and repel him for his many wrongdoings. Drawing inspiration from an actual member of the royal family whose remains have been exhumed in 2016. During the aforementioned Almeida production, Richard III is controversially written figure spared by none of his contemporaries. It is said he murdered his brother George, taken up the widow of Prince Edward of Wales, Lady Anne as his wife after murdering her husband and her father-in-law King Henry VI. Coming along after the Plantagenet’s series, Richard is a masterly executed political torrent taking its strength at the most from one-man´s magnetic manipulation. In all his shades and subtlety, this was one of the most extraordinary acting pieces Zagreb’s audience saw.

Popovic chose to manifest here a nightmare (a contrasting answer to his prior rendering of A Midsummer Night’s Dream at Gavella) residing on a barely lit, minimal stage that will remain unchanged until the very end of the play. Some stairs and rectangular box dubbing first Prince Edward’s grave are everything that greets the audience behind a fully-stretched web designed to hold a small space of proscenium reserved mainly for Richard’s soliloquies.

Without a doubt, the fame and foregoing of this production rest with its main character created immaculately by Grabaric. The pursuit for the crown, his only thirst and desire he repeats in many of his lines, is a bloodbath on the whole. With a suspenseful yet subduing exercises in patience, with his spidery quality, the nests in the heart of the web of lies where only he knows the rules and the next hanging. Grabaric’s Richard is an eloquent, evil twin to Hamlet whose pursuit sees no family connection, consciousness or repent. His sardonic, passionate command of language makes every second of his presence a multi-faced masterclass of transformation. It is indeed Grabaric´s command of language that allows him to “add the colours to the chameleon” in return charming, betraying, murdering and allowing himself to be chosen. There is hardly a moment of respite for him during the two-and-a-half hours of the play. In Andy Jelicic´s excellent new translation (that grew and changed with actor´s input during the rehearsal period), many of the cuts the text survived are working splendidly.

Here to be counted are not good and bad, for those who know the pages of history. Though uneven during the middle part of the play, the characters delivered with strength and different effort are all, in their respect, murderers of a kind. Here, knowing that every woman will end their paths in mourning clothes, interesting to observe is Queen Margaret played by  Bojana Gregoric-Vejzovic whose presence denotes the past that has come to stay among the new generation of wolves; her head is bandaged and hairless, her face a grim image of horror. Interestingly, by the end of the play, three women form a shell of penance that turns into a spiritual spire against Richard´s settlement.

With Martina Cvek as Lady Anne, the famous scene on the grave had a sensuous turn, much owed to the consistent interplay and shortenings. Queen Elisabeth, by no means of a white heart, is heart-breaking by her final act on the last line of the stage, allowing Dijana Vidusin to prove herself as one of the most versatile actresses nowadays, while the role of Buckingham rested with an always interesting to watch Živko Anočić.

The final act came about with a textured, almost confessional dynamic of broken sleep. With a huge image of a Moon (perhaps standing in way as a marking of a time that will come again full circle) Richard´s final nightmare so differently portrayed brought he too a sort of climax helped immensely with Marijan Necak unanimous choreography drumming us into the fall of the martyr and the devil. Interestingly enough is the role of The Cleaner (Filip Sovagovic), appearing from time to time mutely on the stage either preceding or following the death´s taken in the name of Richard. One of the last lines to hear merge the quality of eternity with Richards ultimate end, quoting Richard II.

“… let us sit upon the ground

And tell sad stories of the death of kings;

How some have been deposed; some slain in war,

Some haunted by the ghosts they have deposed;

Some poison'd by their wives: some sleeping kill'd;

All murder'd: for within the hollow crown

That rounds the mortal temples of a king

Keeps Death his court and there the antic sits,

Scoffing his state and grinning at his pomp,

Allowing him a breath, a little scene,

To monarchize, be fear'd and kill with looks,

Infusing him with self and vain conceit,

As if this flesh which walls about our life,

Were brass impregnable, and humour'd thus

Comes at the last and with a little pin

Bores through his castle wall, and farewell king!