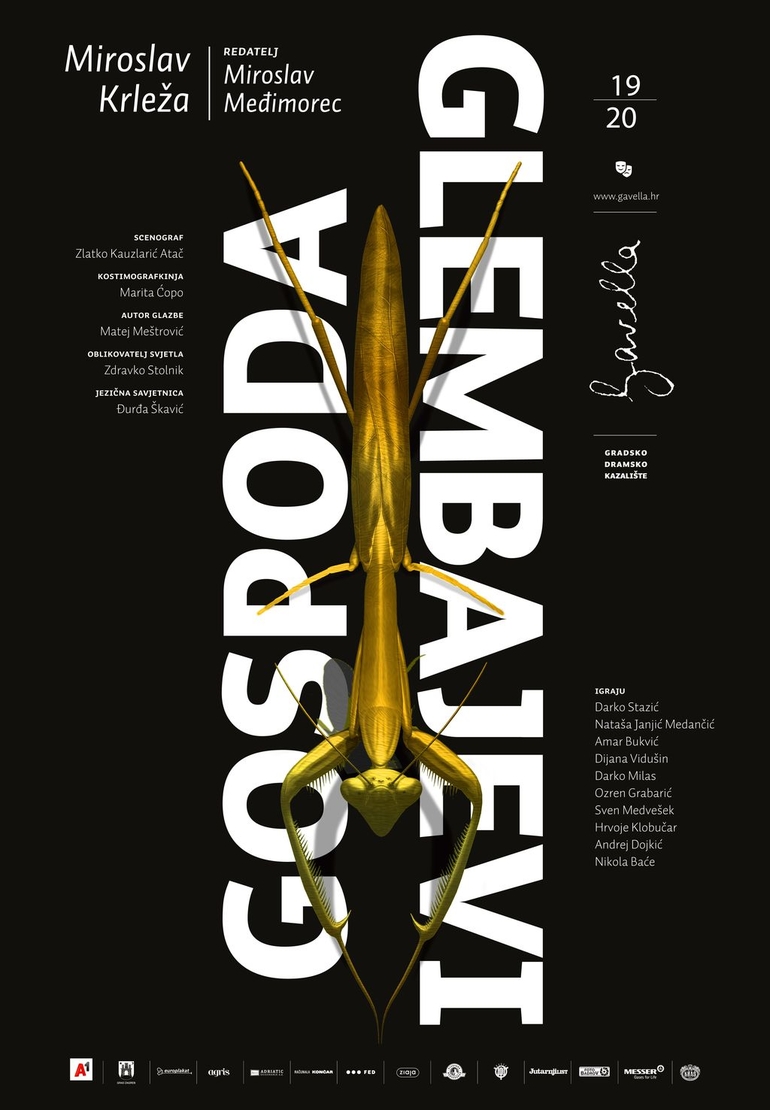 Gavella welcomes the most famous family after 35 years

King Lear proclaims, at one point: There's hell, there's darkness, there's the sulfurous pit— burning, scalding, stench, consumption!- to which a Croatian Shakespeare, Miroslav Krleza, must have given a royal answer. The famed trilogy of the descendants of House Glembays- those murderers and cheaters, those blood-thirsty bastards and patricians, liars and aristocratic leeches- it alone inhabits the full horror of Lear´s response. Krleza´s world is of vivid deconstructions, entering the first three decades of the past millennium with a will of the-wisp. The world is a rotten place to be, the empires already brought through the smell of something rotten all round, in the salons the gold turned to washed-out patina and the old calvary, was defeated leaving their former captains to die in poverty or gambling. Messrs. Glembays was born in such a time in 1929. A burdened, sensitive time of consumption and treachery amongst the portraits of old and the lies they have told. Now, after 35 years, Gavella Theatre has welcomed once again the most famed family of domestic literature, with its newest production that premiered on the 6th of December.

Faintly lit, with some projections of portraits (almost to be forgotten through the play)  between them, Leone Danielli-Glmbay, painter and the only living son (Amar Bukvic) and Sister Beatrice (Dijana Vidusin) converse for the first time in seven years. "All of that in us is so murky, my dear Beatrice", he begins, tailoring his Leone in an even portrait of insecurity and fury, driven until the end by his inner rage. In that very first scene, the two opposing streams have been met. Leone's past is an open wound following the suicides of his mother and sister, with his father Ignatius Glembay (Darko Stazic) and his former mistress and a legitimate second wife baroness Castelli-Glembay (Natasa Janjic Medancic) existing in a somewhat of a farçe. The night reunites Glembays celebrating the jubilee of Glembay Company, however, it proves to be an ordeal of unraveling. On the other hand, after the death of her husband and Leone's brother, Angelika has devoted herself to God's service and it is her serenity that mirrors Leone's grief, so brilliantly and strongly heightened by both Bukvic's expressionism, gnawing with tamed jealousy and guilt his pater familias' ignorance and Vidusin's grace. Though brief, their encounters are at the rim of narrative, structurally opening the flow of narration. Both are treading carefully in their mutual solitude, Leone subtly crushed under her presence and obvious attachment, Beatrice bent on hushing the demons he flew away from.

Krleza's plays are, for the best part, chess duels. The sharpening before the final confrontation moves across the upper-class performance of linguistic, artistic, religious and moral compounds, so that Messrs. present are Fabriczy-Glembay (Darko Milas) and his son Puba (Ozren Grabaric), both affluently, though with different owning of characters, delivering the bureaucratic infirmities and law discrepancies. A colorful web of courtroom battle reigns the most recent events of Rupert-Canjeg, namely that of Castelli-Glembay running over the unknown woman and the fact an unemployed former seamstress with a child in her arms had jumped off the windowpane after waiting for the audience at Castelli-Glembay. This nuanced affair stuffed in their conversation as they strode through the memory lane is one of Krleza's almost accidental ways to touch upon the sociological and economical issues, notwithstanding the greater play of metaphor in service to the morality or justice. The poor are defenseless not because of their guilt but because of their insignificance in the greater plane of things. The Sun has set that night and the Baroness has put on her red gown, folded her hair and got ready for dinner in spite of a migraine. What is it to her to know a woman waited for her the entire afternoon begging for a sewing machine? Or that the said machine came, from Leone, tragically too late? Krleza, much like Shakespeare, becomes fully the scope of our existence in minutes so cruelly given as this one.

Miroslav Međimorec, who has previously staged Leda at Gavella revived the Messrs.in this completely sound, almost monochromatic rendering. The actors move with some ease through the shadows, sometimes ailing their conversation with German words, timidly yet wonderfully complete the music of Matej Mestrovic comes about.

Stazic and Bukvic are harmonious in their confrontation, followed by astute play from Hrvoje Klobucar as Silberbrandt, the saint-like intimus whose mild appearance has here been tuned with his more vigorous life as Castelli's lover. Grabaric, in turns, completely captivates as Puba, what with the skillful deliverance on the opportune moments or quick, almost comical replies showing Krleza's full vibrato. Some might recall his 2015. role as Dr. Krizevac with Nela Kocsis as Laura Lenbach and Stazic as her husband Baron Lenbach. In the hellish love triangle, Grabaric constructed the character of an opportune man with sensibility and precision, so that his Ivan, similarly an attorney, could hold the devil by his throat with soliloquies as the woman before he waxed. Baroness Castelli-Glembay exists fully as a malicious force of fate. Krleza instilled in this character (much like in the character of Laura from The Agony) the will of iron, her past being a sad story nobody may repeat. Were she a weak one, she would have been thrust and ran over by a chariot. Instead, her harshness, her untamed appetites and apparent desire for love have hurdled inside as the years went by. This is a woman whose existence on the stage is marked before she even walks upon it, her sensuousness here to be felt even if we know the seduced Leone's full account.

On the trail of Leone, the drama is about finding one's own identity. Here is a man coming back to the nest of his nerves, of his loss, of his shame. Here is a man standing before his dead father, his bankrupted father, painting a sketch of his face. Here, at last, is his Danielli heart at stake with Glembay's blood, his Danielli hands and Glembay's darkness falling silently as above domes of Zagreb, between him and the white hand of the only solace, however, tortured, the pale Angelika.