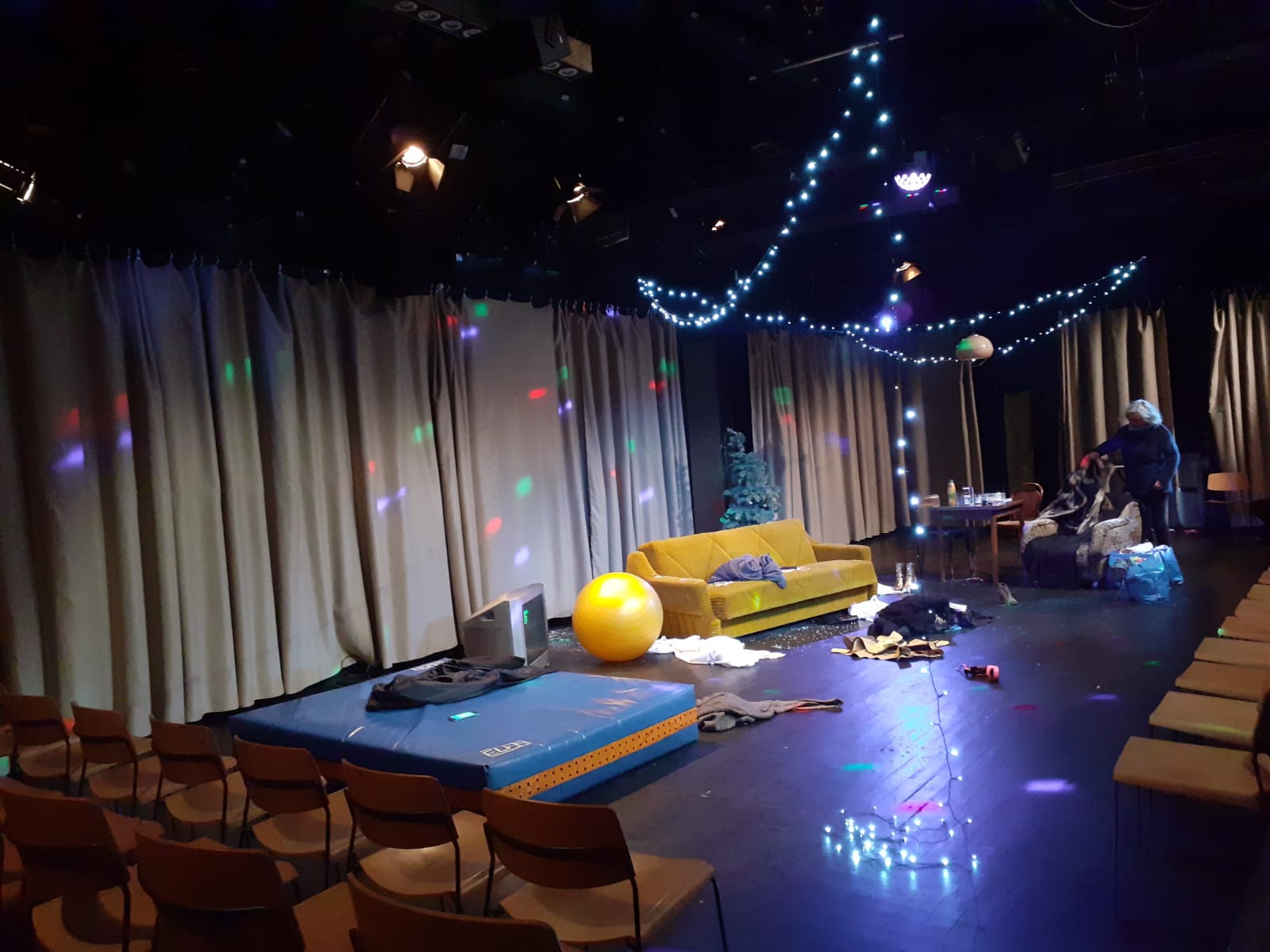 Life's but a walking shadow, a poor player,
That struts and frets his hour upon the stage,
And then is heard no more. It is a tale
Told by an idiot, full of sound and fury,
Signifying nothing

Getting out of the ZKM a little over two hours ago I was stopped because somehow, somewhere, a man wrote a play as if he had read the loneliness of my Generation. In this case, may we read Generation not just as a Zeitgeist model but as a complete and total belonging, belonging to a moment that held us in the blind belief there is enough time? But…is there? Getting outside, the cold air woke up the shifting melancholy of abandonment before another week of unwanted jobs, unfulfilled desires, and just enough light to see the other end of what we may call consuming depression. And yes, hate. Because me and my friends hate, from time to time, the time that has no time for us to forgive ourselves all our past mistakes  Getting outside ZKM tonight, however, I felt hopeful to a fault. Namely, I have rediscovered my being outside my solitary experience, I have witnessed a flourishing of insecurities summed up with love and understanding amongst five human beings who have survived what we daily strive to suppress. Our own making of life.

Roza (Hrvojka Begovic) storms in from Berlin-Zagreb flight into an apartment of Pasko (Dado Cosic), her fragile figure hyped up with some strange pent-up joy. Fluently colloquial thorough, the language of the play projects a translation for the year we are living in-the abbreviations, the quick curses, the imaginative pet-names used to mock or subdue a recent fallout with a fuckboy of 19. The language constructs the reality more palpable, so either it is with thanks to the writer Dino Pesutic or the directions of Judita Garmulin that these swift mismatches of affection, rage and hopelessness float in revelations. With almost movie-like brevity of breath, the meeting of Roza and Sanjin (Luka Bulovic), another mate, completing a somewhat of an original trio, bangs in with stale bitterness. Roza had, so it would seem, left so swiftly pursuing her ambitious architectural career, Pasko was left in a heart wrenched mess between his hypochondriac mother and an artistic dead-end, Sanjin survived the accident and lost or severely damaged his leg, leaving him with a somewhat comical limp. Feeding on the experience is five or so years that have sunk deep within through the choices that had to be made, those who could not have been made and the present with its consuming dead weight of wondering when did it all go wrong? Because even when there is time, it can be too late for some things.

Hitting our self-deprecating image, the author has been more than aware of our borderline association with the overconsuming culture of scroll-and-reduce, Netflix-Xanax-Tic-Tac loveplay, post-and-present, the attachment to the subcultural image of marginalized heroes listening to synth/goth/rave and rolling in the snow, some perhaps quoting Rothko. This is a more than accurate portfolio of the existential dread creeping upon us at the end of our 20s, counting our hangover mornings along with the stupefied afternoons, the hate reflected toward ourselves, sleeping almost more than breathing just to ease the shaking feeling in our hearts which, beating spell defeat. In the ripping tangling of the trauma-driven, the recently scarred threesome is an interesting narrative-hold of Mak (Ugo Korani), anchoring beautifully the distress about him, often with action so solitary it makes his position clearly set on the boundaries of this coveted threefold friendship. However, it is entirely on him to introduce a more soothing stoicism that opens the hearts without manic demands or mocking. Mak´s resolute, firm perspective, at one point underlined with a camera in his hand, maybe shooting a video of their coming-together that will last for another five years or less, his devoted reasoning is a much-needed relief as the company of three suffers not just the reminiscence of youth but a more recent reasons of flight.  The newness of the world strangles us and belittles us, making us a mere black dot on an ever-darkening sky. However, even while we find out Roza´s boyfriend had jumped off the building mere five hours before, even as Pasko´s boyfriend of nineteen rejects his proposal, even then it is obvious they are gutturally bonded. It is rare to know the pain of others, to recognize it and cradle it as our own, and it is the true glistening starlight that is born out of each of these black dots. We do forget our past is not the first enemy, but our constant reminiscent that we turn into obliterating condemnation. But, every black hole can still miraculously be turned into a constellation of belief, at least as Mak lights up space with Christmas lights that seem almost absurdly to reflect only the shattered dreams of the company. Fate never plays up to our expectations, but it is unraveling on and on.

None of the characters is being defined by their upbringing, sexuality or gender. Enter the magnificent Katarina Bistrovic Darvas as recently degraded museum employee turned archivist Korana, we see the prolonged indifference of the Universe. Here is a woman that comes from a different form of Weltschmerz, different anxiety soothed before with more LPs and The Doors or Joy Division between the lights of some other –isms that fall irrelevantly aloud. Here is a mature woman´s defeated frame, her patience wearing thin, later her lust tamed perhaps only by a fall “Sometimes I think the best decisions are to be made during one night, in a span of three hours of insomnia” she says, and it hits hard; harder enough if anyone thinks it brave to judge an ancient God only as he falls on thin snow. Haters are not pretending to lash out in between the exclamations, they are dead afraid in the insecurity of the oncoming Time, of the oncoming Decisions than might be furiously met in their short lives only as new, unmet cruelty. So they will, for the time being, fulfill the Shakespearean verses from the beginning. A heart-warming to the end is the detail of a dog, continuously here and there on the stage, making up the pieces of intimacy fit in our short meeting with the actors as the story unfolds for us.

Getting out of the ZKM tonight, I had an unutterable urge to call some of my friends; four of them still in Bosnia, one in Berlin (the irony has come strikingly) two in Poland, one in Sweden. Some I haven´t seen in over two years, some have been here a couple of weeks ago over holidays that have rushed by in my stupid shifts and too many sweets even on a Christmas scale, some have been my companions over the half of our lives spent in rehearsals, in our poorly warmed community rooms and unlit backstage built upon watery stanched walls. We made our constellations in our blood with what remains to be seen as the future. What binds us is our own fear, our nervous new-old Weltschmerz we try to hush away over eight hours long coffees spiced with some shots of pelinkovac. And sometimes, for a moment, we float in a benign Universe that does not make us shake with anxiety, reaching for a pill into a long night of somnambulism, tripping over all the blame we still owe to the possibilities we alone gambled away.