The French Dispatch - review: The New Yorker magazine meets Wes Andersons "What if?"

What if one of the most popular cultural magazines in the world, The New Yorker, was based in France? Also, what if, it was still the late 60's or early 70's and the magazine has just lost their quirky good-hearted founder/ editor that kept it going? They would, of course, do one last issue, with all the text delivered so far. For the last time, they would offer their readers stories from the world of art, politics (or better yet love and revolution) as well as the freshest culinary delights. And lots of style and humour. Can't forget those. This splendid "What if?" hipster dream has been turned into the latest feature film by  Wes Anderson named The French Dispatch.

Centred around the fictional French city of Ennsui-sur-Blasé, and their local paper The French Dispatch of the Liberty, Kansas Evening Sun, the film opens up with the last days of  Arthur Howitzer Jr. (starring Bill Murray), the editor of the newspaper, that awfully a lot resembles the William Shawn, editor of The New Yorker from mid 50's to late 80's. As he has passed away by a sudden heart attack, his team of journalists starts working on the final, farewell issue. Firstly there is the travel segment run by Herbsaint Sazerac (starring Owen Willson) the cycling reporter. Then there comes the art segment about Moses Rosenthaler (Tony Revolori /Benicio Del Toro) by  J.K.L. Berensen (Tilda Swinton) that looks and sounds almost like The New Yorker writer Lillian Ross. Followed by the French revolution alike segment on the verge of Godard's „À bout de souffle“ with visual references to „La Chinoise“, Sartre's existentialist writing, especially „La Nausée“, done by Lucinda Krementz (Frances McDormand) with splendid Timothée Chalame in a role of her young lover boy/wannabe revolutionary figure Zeffirelli. The final segment of the film is a homage to the writing of James Baldwin within the character of journalist Roebuck Wright (Jeffrey Wright) that does a noir culinary story to die for!

The common issue with plenty of Wes Anderson movies is the force of style over the troublesome substance. Yet, here and there he manages to find a balance between the vibrant colours and remarkable background aesthetics and whimsicalness as well as deadpan humour of his characters. This time around, I believe, he managed to push the style into the second plan. This doesn't mean that The French Dispatch isn't as polished as previous works, or that it doesn't have layers and layers of costumes, colours and silly unnecessary references, it is just, that this time around they serve a bigger plan. Even though every segment has its genuine tempo and colour scheme, they complement and follow each other. I would love to say that Anderson gets out of his comfort zone and tries something new, but truth to be told, his latest interventions to style are troublesome to be explained as bold. Sure, black and white segments, animation combined with film footage works great, it adds to the world-building but it isn't something that deserves too much praise. W.A. fans would love this film either way and those who catch it just for the sake of being in the loop will not get bored and cringe over cream pastel colours and deadpan dialogue deliveries as they usually would.

On the other hand, the simplicity of the film, the multiple narrative structures, is something that makes this work so much more enjoyable. A series of quirky stories placed in the same universe, in my opinion, work way better for Anderson, than that one narrative that starts to drag somewhere in the middle so the majority of viewers just can't wait for the „author“ to come to the point of the story. A chance to pack all the usual tropes of his films in a smaller time frame, within different topics will probably make some space for everyone to enjoy something within The French Dispatch. For those seeking some deeper wisdom as in some of Anderson's previous films, sadly you will get disappointed. The film epilogue is short, it just makes a full circle to the very beginning and is there to formally close the story of writers, journalists and other mischievous souls gathered around the last issue of the magazine.

Overall, I would say this is a step forward since the Isle of Dogs, a film to dwell into if you have some/any knowledge and love for lost times of printed weekly magazines, unusual people stories, humour on the verge of tragedy and drama on the edge of love and hope. 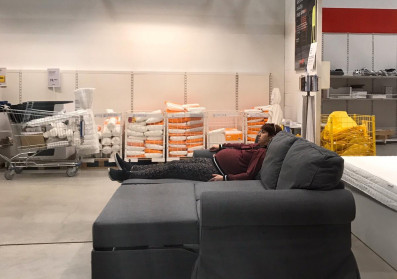