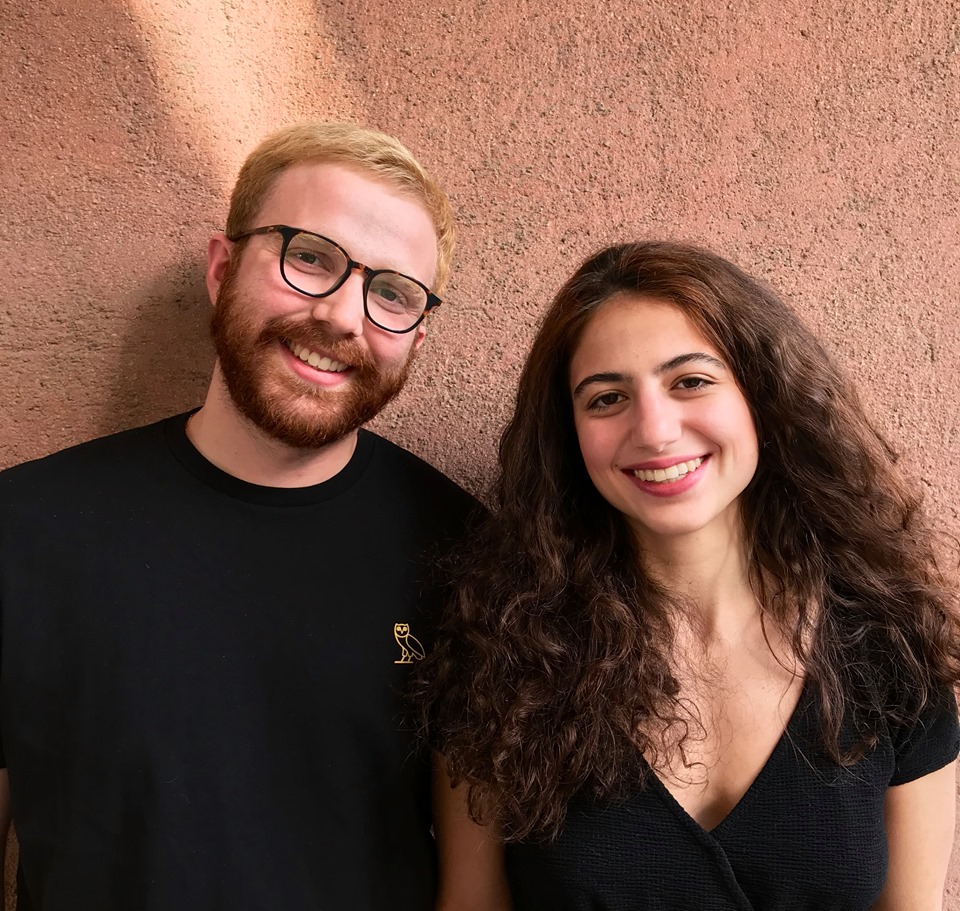 Lidia and Dimitris made the short films “Yawth” and “Sad Girl Weekend” together and they are currently working on “The Good Girls Club.”

Lida Vartzioti graduated from the School of Film Studies, Faculty of Fine Arts of the Aristotle University of Thessaloniki, specializing in screenwriting. She worked as first assistant director on “Ouzeri Tsitsanis” by Manousos Manousakis, and on many short films and commercials.

Dimitris Tsakaleas holds the Filmmaking Certificate from the London Film Academy and graduated from the School of Film Studies, Faculty of Fine Arts of the Aristotle University of Thessaloniki, specializing in Audiovisual Film Production. He has worked as a producer on several short films, a feature film, commercials and music videos.

Lidia and Dimitris made the short films “Yawth” and “Sad Girl Weekend” together and they are currently working on “The Good Girls Club.” Without further ado. this is the interview of Greek director duo about their film "Sad Girl Weekend" which is part of EFP FUTURE FRAMES 2020 at the Karlovy Vary International Film Festival.

Why did you want to become a film director? And how did you become it?

Lida Vartzioti: I wanted to become a film director because I found movies the most beautiful and interesting way to tell a story. Since I was a kid, I always made up stories in my head. Later I started writing them down and took little videos or photographs of whatever my eye caught on. Being a director is not something you can achieve right away. It's an ongoing process that comes with experience. You have to try things, fail and then try again. But the first step to do so was my decision to go to a film school.

Dimitris Tsakaleas: Since I was really young, I always remember myself watching films and loving the experience. The fun thing is that I believe that the reason I have started wanting to become a director, or filmmaker, in general, was because I was watching many behind the scenes footages of many films and TV series (especially Friends), and I was really amazed how all these people worked and how fun it seemed. I really believe that filmmaking is a team sport and I still find it fascinating how people cooperate to create worlds.

Lida: Since I can remember myself, I was watching Disney, Pixar and Studio Ghibli movies. Most of them I have seen so many times, that I know them by heart now. I loved seeing those extraordinary worlds, the adventures of the characters, their happiness, their sadness and how they transformed in front of my eyes.

Dimitris: I have always remembered myself watching teenage films, coming of age stories. From Breakfast Club to High School Musical. To be honest, as I was growing up, American cinema was the main influence on me. I was watching mainly American films. I cannot remember watching a lot of Greek cinema, because I couldn’t find films that were close to my interest.

What is the starting point of your film "Sad Girl Weekend"? Your own experience, news in Greece or some other things?

Lida & Dimitris: Sad Girl Weekend is a story about an end of an era, new beginnings, and the way each of us is handling the ever-changing conditions in our lives.

When we started writing the film we were on the threshold of our "true" adulthood, after having finished university life, we tend to observe ourselves and our surroundings, our wants and our needs, our habits and the conditions that keep on changing. The frustration for "tomorrow" grew bigger and bigger and our thoughts for the future started to become the plan for today.

This film is our thesis project for the School of Film in the faculty of Fine Arts of the Aristotle University of Thessaloniki. We chose to narrate the story of Elli, the weekend when a sad girl has to say goodbye to her best friends and thus to her student lifestyle. Sad Girl Weekend is our personal goodbye to our university life. The film follows Elli and her two best friends, Joe and Natasa, who decided to spend their last weekend together before the two latter ones leave for their studies abroad. Elli can handle neither the loss of her friends nor the upcoming goodbye.

Elli is every one of us who feels like she is being left behind. Her friends are starting a new phase of their lives while Elli is still in the same situation. A girl who cannot deal with her "staying behind”, the sorrow, the sadness and the dead-end that she feels for the upcoming goodbye. We choose to narrate the story as a coming of age drama in which we focus on the main character who finds herself in despair, being unable to think or act sober and calm. She is unable to adjust to the new conditions which will define their friendship.

Dimitris & Lida: We have worked with Asimina in our first film together, “Yawth”. With Asimina there is complete trust between us three. We started to talk with her about the story, and she is always on board really early on the writing process, so she is there during how the story unfolds. For this film, we didn’t have specific references, but we talked more about feelings, moods and the aesthetic of something that has already been done (like it was a postcard from the past).

The core of this movie is the presence of 3 lovely girls. Their anxiety, excitement, frustration which 3 actresses represent are very realistic to me while watching this film. How did you find these 3 actresses Natasa Exintaveloni, Elsa Lekakou, Georgina Liossi? I want to know why you choose them for this film too.

Lida & Dimitris: We couldn’t be more blessed with our three girls that brought to life the Sad Girl Weekend story. With Georgina Liossi, we have worked together in our first short film “Yawth” and we fell in love with her presence on screen. We have seen Elsa Lekakou at Christos Massala’s award-winning short film (one of our personal favourites) “Copa–Loca” and she was captivating. Last but not least, we have seen Natasa’s work (both on film and TV) but we were huge fans of a persona she has created on her social media and thought that the way she uses comedy and humour was something that we needed in our story.

Another protagonist in this film is a gecko. It plays an important role in the protagonist's emotion, and the tale relating to the gecko appears in this film. So, I want to know that a gecko has a special meaning in Greek histories, like a horse in Iceland or fox in Japan. And how did you teach the gecko to act? :D

Dimitris & Lida: We are really proud of geckos acting (laughs), it is created by our very talented CGI Artist Anestis Eralidis. We were working really close to Anestis and we did many tests in order to create something that seemed so real in the film. In Greece, geckos are supposed to be an animal of luck, and in many Mediterranean countries as well. But specifically in Pelion, where we shot the film, the place where Dimitris spent his summer vacations as a kid, it is supposed to be a really bad sign. The myth that the girls are talking about in the film, it is an urban legend that is real in Pelion. So we played with this urban legend, and we thought that we can reinvent it to a new level and to a whole different story.

And one of the most attractive elements in this film is its soundtrack by Melentini. Her music is so dream-like that I'm intoxicated in your beautiful film very deeply. You and Mr. Tsakaleas collaborated with her several times. How did you meet with Melentini? What is the reason you collaborate with her again in this film?

Lida & Dimitris: Actually, Sad Girl Weekend is our first collaboration with Melentini. Later we have directed her new music video for the song “Kids of Glam”. We were familiar with Melentini’s music through the film “Afterlov” by Stergios Paschos, where she created a great soundtrack for the film. The way we worked with Melentini for the film is that we had several talks about the story and the feeling of how the music will add to the story. She had the main song “Koritsia se lypi” on her mind and we gave her the freedom to do whatever she wanted and she presented us with the main song of the film, and then started creating the rest of the music.

Lida & Dimitris: The situation in Greece sure it's getting better in recent years. After the big success of Yorgos Lanthimos, more and more people started to be interested in what Greek cinema has to offer. That gave the chance to many young filmmakers to rise and opened many possibilities for them. Yet still one of the biggest problems in Greece is the procedure to finance your movie and that’s why for many people, it takes them so long to make their next film. It needs a lot of patience to be a filmmaker in current Greece, you keep testing yourself on your goal in filmmaking.

When cinephiles want to know Greek cinema history, what Greek films should they see? And why?

Dimitris & Lida: There are a lot of films that someone can watch in order to understand Greek Cinemas, so it is a difficult pick. But we suggest that someone must watch Theodoros Aggelopoulos, Panos Koutras, Athina Rachel Tsangari, Tonia Marketaki, Dennis Iliadis and the list goes one! A hard question for us.

If you choose one favourite Greek film, what film do you choose? And I want to know why. Is there a personal memory?

Lida: Right now, the first movie that popped up in my mind is Suntan by Argyris Papadimitropoulos. I remember when I was watching it in the theatre, at the time it was winter in Greece, but the movie takes place during the summer on a Greek island. I was so thrilled as I was watching it that I thought I was on that island too and I could feel the heatwave. I landed in reality when I stepped out in the cold rain, but in my head, it was still summer.

Dimitris: I think Chevalier by Athina Rachel Tsangari. I remember I wanted to watch it so bad since the trailer was dropped online. I knew the trailer by heart. I have watched on Thessaloniki Film Festival, and I remember that I was so enthusiast of the story and how Athina, alongside Efthymis Filippou, created comedy through their story. Also, the way the actors all collaborated I still find it amusing

Lida & Dimitris: We are in the financing stage of our next short film, the last part of the Uncool Trilogy (Yawth and Sad Girl Weekend are the first two parts). We are on the development stage of our first feature film and we are in talks with some really cool stuff but unfortunately, we could not talk about it yet!