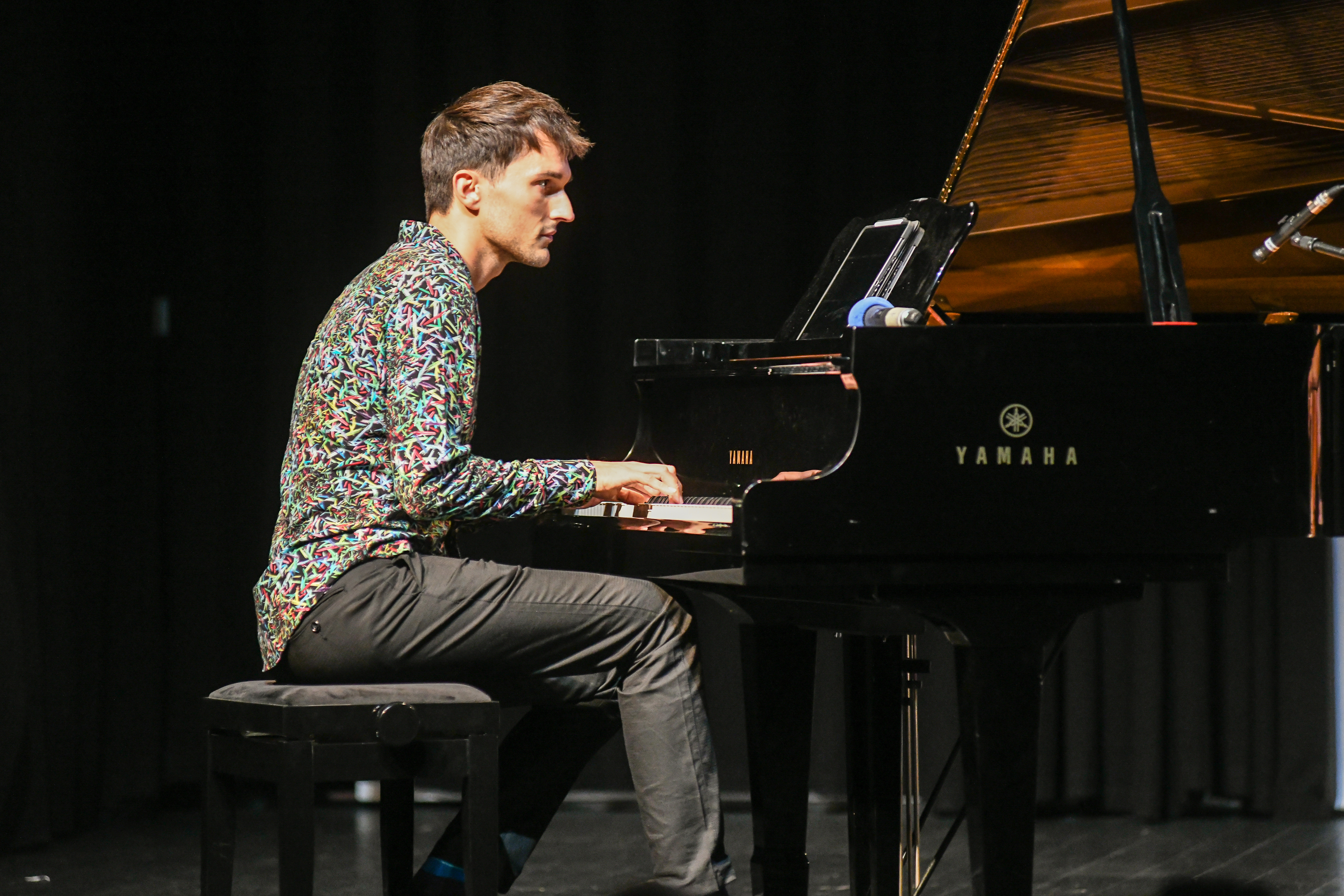 An introvert, but an extrovert in art - Interview with Ozren K. Glaser

I always say that the art itself is the first, but it wouldn't exist without people.

Ozren K. Glaser, composer of music for film, theater, popular music and all other media, was born in 1984 in Slovenia. He collaborates with numerous artists around the world, including Oscar and Grammy winners. In addition to being a composer, he is a certified sound engineer and is active in film and writing, for which he has received several awards. He also released three albums of film music and one album of music from musicals. So far, he has composed around 400 compositions for various instruments, orchestra and choir. In 2013, he founded the International Sound & Film Music Festival (ISFMF), of which he is the artistic director and producer. He is a member of the Croatian Society of Composers (HDS) and the American Society of Composers, Authors and Publishers. He is also a member of the voting committee of the IPA Academy and the committee of the Online Film & Television Association.

1. The 10th International Sound & Film Music Festival (ISFMF) with its finale in Samobor. Can you explain to us how the festival was divided, i.e. which part was held in Pula and which part in Samobor?

This year we decided to take that step for several reasons. In Pula, we have been the organizers of the ISFMF for years, so it was kind of natural for me to simply continue that series of successful years. We also had good support and cooperation with Pula, so this cooperation was extended through a kind of partnership with the Pula Film Festival, where the president of the jury was also my long-time friend, the Oscar-winning directed by Stefan Ruzowitzky. And considering that we were forced to cancel the Gladiator event in the Arena two years ago due to the pandemic, we decided to hold it this July. We also brought four-time Oscar winner Scott Millan to whom we gave a lifetime achievement award, and who won one of his Oscars precisely for Gladiator, so the whole event was even more magical. Honestly, I did not expect that we would have as many as 3,500 people in the Arena and that there would be such a wonderful atmosphere. We just had fun. In Samobor, on the other hand, a classical, traditional festival was held, let's say, with our program as we had in previous years, with Oscar-winning guests, the awarding of our Crystal Pine awards for the best music in films, a concert part, socializing with guests, etc.

2. In those few days of the festival, Samobor had the unique honor of being home to several Oscar winners, among whom were Oscar winners and Oscar-nominated actor Ciaran Hinds. I have to ask you how you gained their trust and managed to bring such an elite to Samobor?

A question for million dollars haha. Honestly, I don't even know. I think it's one of the key things because I don't approach them as an elite at the start. From the very beginning, my relationship with all of them has been friendly, human, devoid of those business, polite phrases and ways of communication that are, in fact, foreign to me personally. And so then they are probably surprised by such an approach, so they relax more quickly and realize that as a festival we are completely different from others, so to speak.

3. We know how difficult it is to organize anything in modest conditions and budgets, especially if we want the festivals/events to be at the level you did. Who supported you all this year? How many of you were in the team? Did the call for volunteers bring a lot of people?

True, it is incredibly challenging to do a good thing without the right support from institutions. We, in fact, never had anywhere near the support that any "normal festival" in Croatia has, we pulled everything out on muscle and enthusiasm and, of course, private finances. We were lucky to have a nice collaboration with Arenaturist, a hotel company, in Pula, as well as the City itself, and in Samobor we were recognized by the mayor Petra Škrobot and the Tourist Board, so that definitely gave us a boost. And we are, in fact, a very small team. I do everything with just two people, Željko Glaser and Marijana Knezoca. This year we had very welcome help in the so-called ground management by Ines Ibrišević, Gabrijel Vukojević and Mirta Bujan, with whom we saw how important it is to have capable and trustworthy people in your team.

I always say that the art itself is the first, but it wouldn't exist without people. For this reason, I like meeting people, exchanging those energies that transform into synergies. The most beautiful thing for me is when all of them come to the festival, from the most awarded Oscar winners to some grandmother who came to listen to the concert, and in the end it comes down to the fact that we are all human and we can connect, you know the one like in Avatar, when they say "I see you" to each other.

5. This year, the festival had a lot of registered films, even a record so far. How did you reach a new audience, new filmmakers, who especially delighted you?

Well, over a thousand, that's a lot haha. I would say terrible because it is a huge challenge to watch all these films, listen to their music, and valorize them in an honest way. Since the first year of the festival, in 2013, we have gained fame as a completely new platform, something interesting and tempting, even though we were still in our infancy at the time. But there are thousands and thousands of film composers in the world who simply don't have the opportunity
to hear their voice, their art. It's one thing when you work for a film, but the reach of your work is something completely different. We provide them with that reach, and they recognized it. This year, my personal favorite was Karl Frid with the film Pleasure. He also won in the category of best music in a feature film. I love it when composers step outside of the mainstream (as much as I love the mainstream) and explore the possibilities of music.

6. In addition to being a creative director, you are also a composer and author of music. How do you balance all three careers and is there still, especially in Croatia, a bad view of being "more than one thing at once"?

You know what they say - but that's not all! I'm also involved in writing, video production... They used to tell me that I'm a "svaštara". I can understand that term, but in my case it is so meaningless. I'm just in love with art in general, and I happen to be good at more than one field, so I'm doing whatever I'm good at. I like to express myself. I am an introvert by nature, but an extrovert in art. I like to use all media to show something how I feel, be it in music, in film, in writing, even drawing or photography... And somehow the balance comes naturally. Of course, it's a matter of organization, but when you do what you love, balance comes naturally.

7. After the very successful presentation of "Gladiator" in Pula with live music, which was an incredible feeling, magnificent and a combination of the spirits of history, and the excellence of today's musicians, culture and art, which certainly caused a lot of emotions in the audience, are you preparing something new?

Absolutely yes, but I wouldn't want to say anything more than that yet, at least until some things are established. We have to maintain a certain amount of mystery!

8. You are a very simple and down-to-earth person, how do you manage that? What fills you up privately, how do you stay in balance?

Thanks for that observation. I know it sounds corny, but I think the main thing is that I have always been consistent with myself, the way I am in private, the way I am in all other fields. I keep that child in me. I think that a person gets eaten up with age when he constantly pretends to be something he is not, constantly wearing some masks, depending on the situation. You lose yourself along the way. Privately, I am filled with nature, let's say. I practically live in the Samobor Mountains, so I go hiking a lot, almost every day, it's something I simply adore. Hanging out with special people, reading books, watching movies and series, playing music, singing, thinking and meditating, there are actually a lot of things that make me satisfied. It is wonderful to find beauty in all the things that surround us.

9. Where did you last travel, on what occasion and what inspired you on those trips?

I just returned ten days ago from Paris, where we had a festival project presenting Alfi Kabilj's music performed by one of the world's best pianists, Jean-Michel Bernard, in honor of Croatian-French friendship whose diplomacy has been going on for 30 years. And it was my first trip outside of Croatia in almost three years, so it came in very handy. I love to travel. Airports are like playgrounds for me. And in general, I would say that it is extremely important to travel, to broaden your horizons, to meet people, to exchange experiences, it really opens up some new perspectives for you, and thus potentially new projects.