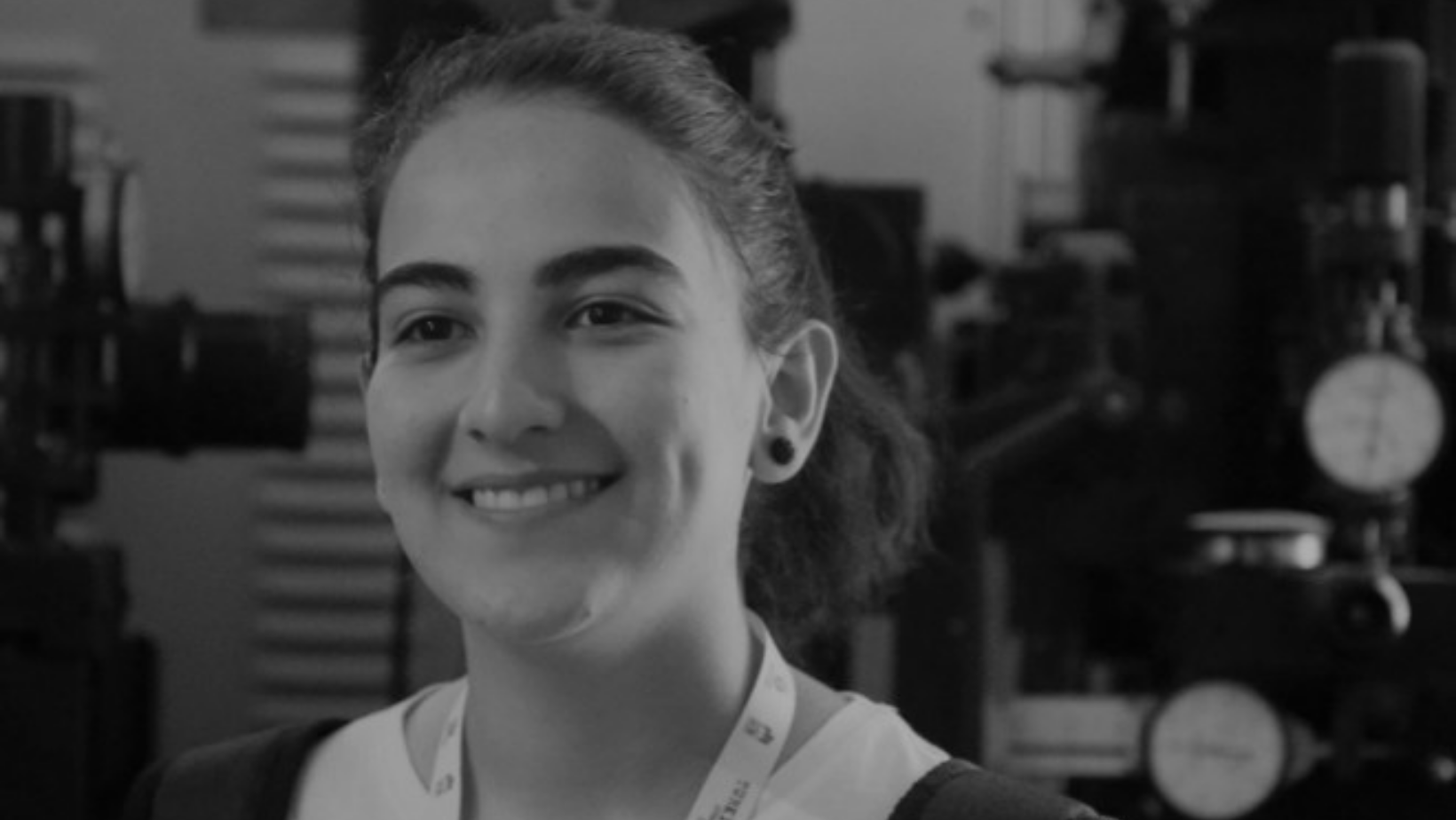 "I believe the situation will improve over the years and I trust Azerbaijani cinema."

Japanese cinema magazine Z-SQUAD and Tettyo Saito started a year-long project in 2021; Digging into Azerbaijani cinema history. Although it has been criminally ignored by the world, there is an abundant, glaring and infinite flow of cinema in Azerbaijan. Z-SQUAD features on Azerbaijani classics like Gün keçdi by Arif Babayev or Özgə vaxt by Hüseyn Mehdiyev, and new talents in the 2020s. This time, Tettyo had a chance to interview with Shovkat Fikratgizi, the director of The 6.45 Train, which makes him sure that she is one of the brightest young talents from Azerbaijan.

At first, why did you want to be a film director? How did you become a director?

I have grown up with art, especially music. I've always dreamed of a job that combines all the aspects of art. Then I decided to be a Director. Of course, back then,  I didn't realize that the cinema was that difficult.

I started to be interested in directing when I was 13-14 years old. But I was thinking that I couldn't do movie directing. It was very difficult for me, and I had little self-confidence. Then I believed that I could achieve this thanks to my teacher. At that time, I was watching the films of my teacher Eldar Guliyev and Rasim Ocagov from Azerbaijan, and I was loving and still love directors such as Tornatore, Almodovar, Haneke, Trier from world cinema.

What is the starting point of The 6.45 Train? Your own experience, news in Azerbaijan, or some other things?

In our faculty, students take their exams with films every year. I was looking for a script with my friends for the movie I was going to shoot this year. I wanted to film a drama about a man or a woman. After reading many storybooks in libraries, I saw a story of Ramiz Rovshan in the comedy genre. This story was not in the style that I was able to shoot or that I wanted to shoot. But a sentence there impressed me very much. He was going to the train station every morning to wait for "her". In the story, the man's reason for going there, waiting for her was different. But I wrote the script for The 6.45 train movie in this one sentence.

Honestly, when I watch its first sequence, I'm sure that this film is a masterpiece, which is completely right. In the sequence, an old man wakes up, stands, walks, puts a picture in the right place, and goes out of the room through a door. After this tranquil landscape, I'm deeply surprised that a woman appears suddenly from out of frame. The film's world expands in a breathtaking, beautifully rich way in this mise-en-scene. I want to ask about this sequence. How did you shoot this sequence with your cinematographer and actors? How did you choose this scene for the film's first sequence?

First of all, thank you for your nice words. Frankly, I couldn't quite imagine what this scene would look like until I didn't see the place. The burden was too high for this scene. Question marks had to remain for the audience, and some things had to be fully exposed. This scene was a very subtle way of showing the husband and wife relationship. The moment I saw the place, the scene came to life in front of my eyes and I thought it would be the best way to shoot it with one plan. I shared my thinks about the scene with DOP. He also liked it very much and we decided to shoot this scene like this.

According to the end credit, this film is based on the story of Ramiz Rovshən. I love his works too, especially his screenplay for Hüseyn Mehdiyev's masterpiece "Süd dişinin ağrısı". But how did you meet with the works of Ramiz Rovshən? What is the biggest reason to be attracted to his works, especially the story?

I think I have answered some parts of this question. Ramiz Rovshan is a very good poet and writer. Before this movie, I liked his creativity and was watching him closely. Of course, I became more interested in and after shooting this movie. Like I said, I made a movie with one sentence of him :))

And the place in this film reinforces the story's depth very deeply. Lonely station with a railroad running on the ground, nature coexisting with this station. This place has its own beauty and sadness at the same time. Where is this place? Famous place in Azerbaijan, or your home place?

We visited all stations and abandoned places in Baku with the cinematographer. The place was supposed to have its own story. Looking there it should have reminded the audience a lot. Unfortunately, we couldn't find such a venue and we decided to shoot it at an abandoned station next to a school. This venue met the criteria, but by feeling both the cinematographer and I knew we were not looking for it. After taking pictures of this place, we got on a random bus and got off on the train tracks. We followed the tracks and found this station. As soon as we saw this place, we were sure that this was the place we were looking for.

I'm impressed with how delicate your depiction of the relationship between a father and his son. In the mix of emotion personal to them and universal to us, this relationship makes audiences think about the family in Azerbaijan and their own ones. What is the most important thing when you depict this relationship in the screenplay?

I did not want to show the relationships in the film to the audience with dialogues or major events. small details were required. But these details should have been familiar to each of us. While I was writing the script, I tried to highlight such small details and I think I got it a bit.

Concerning the previous question, the core of this film is the actor Ayșad Məmmədov. He captures the father's complex emotions like frustration or profound sadness for his life and family. So, how did you find him? What is the biggest thing to choose for this film?

To be honest, before the script was written, when the first idea came to my mind, Ayshad Mammadov was the only actor I could see. I wrote the script with him in mind, and I admitted it to him. In any case, I wouldn't have made this movie if he hadn't accepted this role.

I heard that you were a student of Eldar Quliyev, one of the most famous Azerbaijani maestros. Definitely, I want to ask you about it. What is he like as a professor? Do you have a personal memory of his class? And what is your favourite film from him?

All of Eldar Guliyev's films have their own mark and touch. So as a viewer, all his films are good for me, but as a director, it's Girov, a movie that is close to my soul. I said I would shoot this movie if it were me. Eldar Guliyev always told us. Directing must be in one's soul, no one can instil this in you. But I will instil in each of your intelligence.

When cinephiles want to know about Azerbaijani film history, what films should they see? And why?

If you choose one favourite Azerbaijani film, what film do you choose? And I want to know why. Is there a personal memory?

How is the current situation of Azerbaijani cinema? From the outside, it becomes good. New talents appear at prestigious film festivals like, for example, Teymur Haciyev at Cannes, Elvin Adigozel and Ru Hasanov at Locarno, and Hilal Baydarov at Venice. But how do you see the current situation from inside?

Until recently, the situation was not very pleasant. One of the biggest factors in this was that our country left the Soviet Union and started a new trend in all respects. Financial problems also affected this. But in recent years, a new cinema movement has started to spread with the directors you named. I believe the situation will improve over the years and I trust the Azerbaijani cinema.

Do you have a plan for a new short or feature? If so, please explain to Japanese readers.

After The 6.45 Train, I made another short film in 2020. The director of photography of the film was Ruslan Aghazade, whom you know from the Balaca movie. Mehriban Zeki, one of the most successful actresses of Azerbaijan, starred in the film. The movie is now in the editing process. It has been edited a few times, but I haven't achieved the result I want yet. Besides, I am working on a short film script. This movie will be about "growing up".