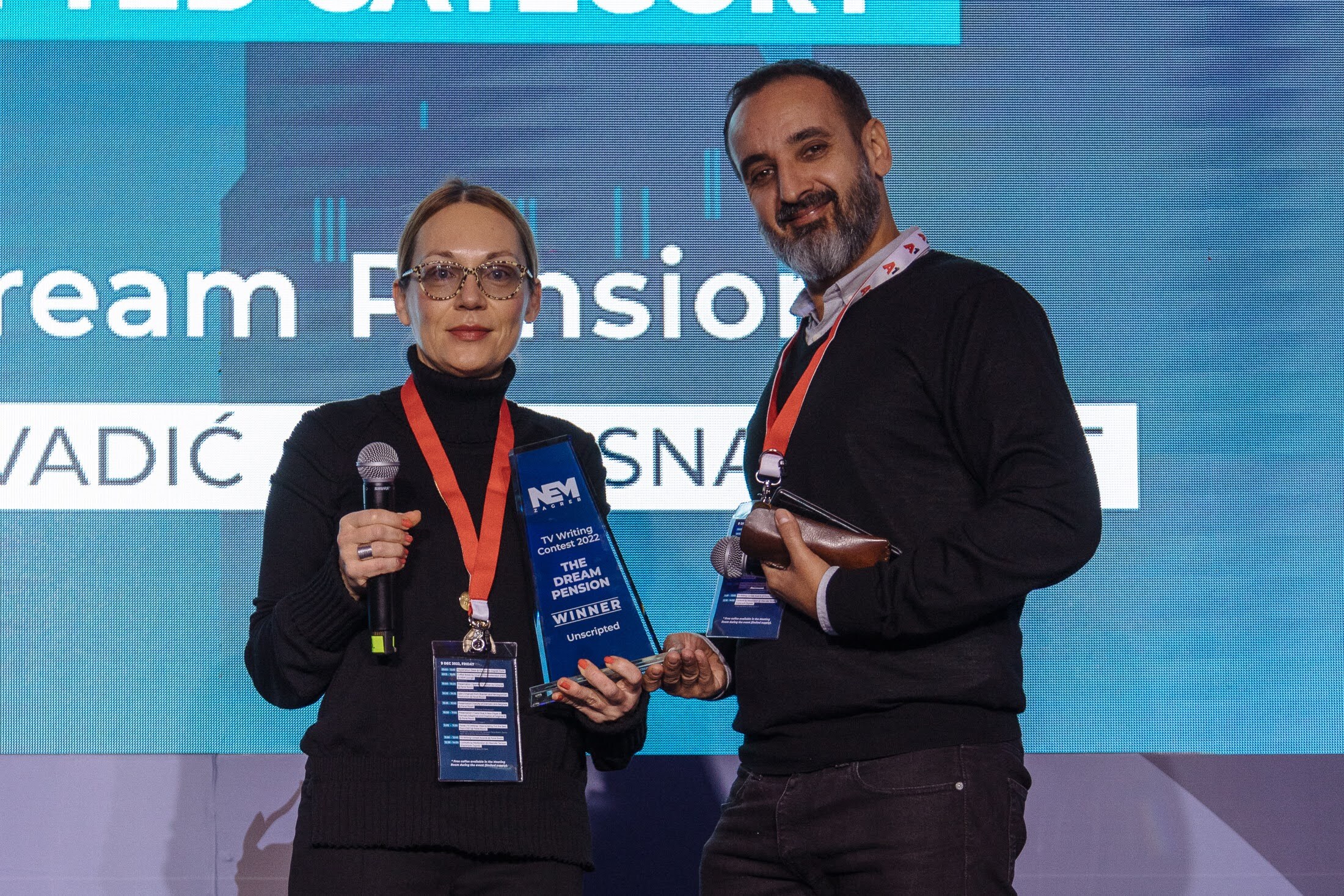 Winners of the un-scripted category: Jasna Nanut and Hrvoje Osvadić

NEM winners of the Writing Contest

First of all, I want to congratulate you on your award in the UN-SCRIPTED category. How did you come up with the idea for "The Dream Pension"?

It was actually born from another show. I was developing a comedy series „Playing the Tiger“ with the main character being a middle-aged guy in a race against the biological clock after he finds out that his sperm count has dropped drastically. He is a TV presenter, so I wondered what kind of show he could host, something fresh and witty, with candidates at the opposite end of his journey (he's looking for a proper woman to marry and have a child with but it turns out that things have changed, now women are the stronger sex, making all the rules in love arena). So, the older population came to mind, of course, and I thought about what they lack of the most. And I knew that would be the pension. Most of them need a bigger pension in order to go through the golden age gracefully. So what could these people do, how could they compete for the big prize? And the more I thought about this show, the more ideas came to mind. So while developing the "Tiger", Hrvoje and I started developing "The Dream Pension“ as a separate project.

That's actually the initial idea from where everything started. And then Jasna came to me and explained the idea, and I said that it was genius. Because I worked a lot with people in their golden age and realised that they are very witty and funny, that they have no shame, no judgments and are not afraid of the cameras. With them, in a relaxed way, you come up with very honest conversations and stories. I worked a lot with Robert Knjaz, his shows often included elders, and I also worked on a documentary series that was for the 65+ generation. When we started working on this project, Jasna and I opened a Pandora's box and realized that there is no content for older people, and in fact, they are the majority of the society. The other day, while preparing the presentation for "The Dream Pension", we extracted the data that there are more than 200 million people over 65 years of age in Europe. And that age is not what it used to be. People of 65+ are still fit, both mentally and physically, they live and eat well, and the medicine has progressed, too. And we as a society must start thinking about how to entertain them, how to bring them back, include them not exclude them, help them become a vital part of our society. I think that these kind of projects, especially humouros ones, are actually something that demystifies old age. The inclusion of their families and their grandchildren together with a humorous approach to it is something that we might have fun with together, both them participating and us watching. What is important, of course, is that we won't be lauging at them, but with them.

What is actually, as far as the production part is concerned, the probability that this project will actually happen?

We already talked to all broadcasting companies in Croatia. I think that we surprised them a little by the very category of this show which actually doesn't exist at the market. It's a Prime Time high-budget show and they really liked it, so I assume that the talks and negotiations will progress. There is also an international interest, which is our priority. We will present "The Dream Pension" at European markets and look for partners, production and distributionwise. If we manage to achieve something outside of Croatia with this show, and I believe we will, it could be the first licensed show of this caliber to come from Croatia.

Given that you have worked on such international franchises, how important is it to prepare the Script well for such a show?

Our basic document is the Bible of a 100 or more pages in which the show is elaborated to the smallest detail. When someone buys the license, with the help of our Bible they can produce the show because it contains everything they need to know to produce it adequately. We are currently working on it, it is 80% finished. It is a very serious job that requires a lot of time because you have to predict all the situations that could happen, all the pitfalls and glitches that might happen in the very arrangement of the game, the challenges and scoring.

It takes a lot of time for Jasna and me to talk about what happens if, for example, in the fifth episode, instead of 1 task, we have 2 and then someone gains immunity because everything gets messed up by the end. That's why it's very important to analyze every aspect, predict every trap in order to refine and determine what the basic concept is and then you can build and work on the subtleties of humor. Every country has its own humor and of course it is always welcome to refine and adapt it, but we are the ones who made the show and we have to make sure that it stays true to its original idea.

One thing is universal, and that is laughter and stories that actually bring people together around the same table, but I think that we are different in Croatia in one thing, and that is the amount of pension. Have you thought about that part?

Once, I did a TV quiz, although it never took off, but it had prizes in it. And it is very difficult to budget the amount that you will have to give away for prizes. You don't know if a person will take home the top prize in each show. However, there is a table that is normally used by insurance companies that assess the risk of investment. Here in Croatia the average pension is around 350 euros, and therefore we agreed that our winner will receive an award between 350 and 400 euros per month for the rest of his/her life. The average life expectancy of a pensioner after retirement is 12 years so we did the math based on that. Due to a great complexity, events like NEM are very important to us, as they allow us to actually present our ideas and get support.

What is your next step?

We made some interesting contacts at NEM, and now we have to finish the Bible and make a teaser for the show. Looking forward to it, it's going to be fun.

You mentioned pension and insurance companies that have their own risk tables. Have you thought about insuring the show?

The television that produces "The Dream Pension" will deal with it. But of course, each show has its own insurance and is subject to certain risks. One of the postulates of our format is that, first of all, all shortlisted candidates will undergo physical and general medical testing. This does not mean that we will not let some people who have some health problems participate in the show, but we will be careful with them, we will know which situations we can or cannot put them in, and what we have to watch out for. And of course, during production, there will be a medical team on stand by at all times.

Another question for Jasna, given that you have directed films, how much do you think this format will differ in that directing approach?

I am the author and creative producer here, a showrunner. Directing such formats is something completely different from directing a film, it is also very interesting, but it is mostly based on technical part and I am more useful here in production and creative part.

Have you already thought about a director who could make it happen?

There are masterful directors specialised for directing studio shows which "The Dream Pension" is in its essence (some challenges are pre-shot on location, and that will require on set directing as well). There is one director in Croatia that we would like to work with and have worked with before, and that is Ivan Miladinov. He's the best one so we hope that he will be the one.