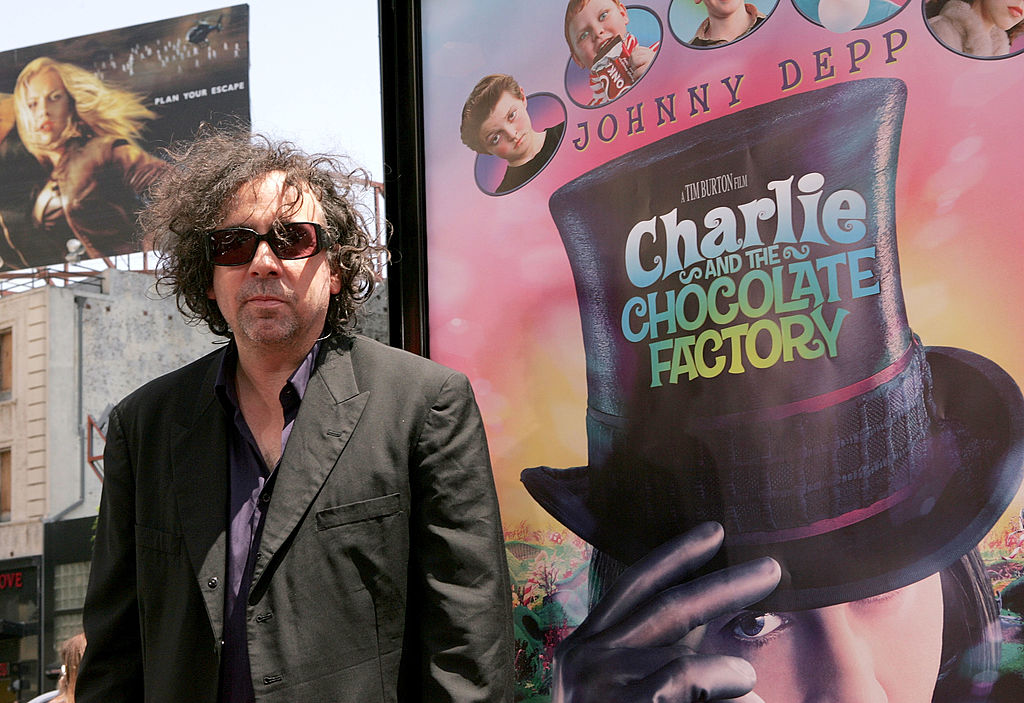 A Christmas guide to emotional movies.

The precious that will keep you indoors with hot chocolate and soft blanket.

Sometimes, not being into the shiny glam of socialisation under the mistletoe has its advantages. Namely, one wants to set up a record between December 1st and approximately January 2nd  as to how many hours can be spent procrastinating edible delights and binge rewatching movies one has known from childhood onwards. So, without further ado, here is a rough overview from yours truly as to how to survive the December rush and be in a mood to hug somebody - or, at least, pat them awkwardly.

Charlie and the Chocolate Factory (2005)

To say Tim Burton is more "at home" with Halloween skeletons and Victorian cemeteries, would be an understatement. However, his world came to a vibrant turnaround - not rid of moral judgement covered blithely with a blank sarcasm - with an adaptation of a famous children's novel Charlie and the Chocolate Factory. As per usual for this director's oeuvre less gothic loner, young Charlie unexpectedly wins a Golden Ticket for Willie Wonka's lifetime award, a visit to the most celebrated Chocolate Factory in the world. The tale is drawn through grimness of outskirts where a family of Buckets - no, this is not a euphemism - making ends meet, to a monumental Factory of the dreams where children's worst traits are put to test. With Freddie Highmore being asked to play Charlie by none other than Johnny Depp - Mr Wonka himself - and Helena Bonham-Carter wonderfully everpresent as Mrs.Bucket, you will either find Charlie a sweet or sour treat on a countdown to Christmas day.

The author of this article is not to be held accountable from 1st of December until January for all the wrong decisions, and a guilty pleasure of Reneé Zellwegger's Miss Jones unpopular thirst for being happily in love is no exception. If anything, a woman getting drunk alone on New Year's ear with a bottle of wine, kicking leg in a solo lip-sync competition with Céline Dion is #bigmood. Having also had Chaka-Khan extortion after a bad breakup, this movie is ultimate jam for red-and-white snowy times.

The first movie in what is nowadays a trilogy brings us London-based Bridget, a struggling assistant of a senior assistant in publishing, with a tamed crush for Daniel, a perfect You-Know-That-I-Am-No-Good editor in charge (played by Hugh Grant), her lot of friends slash support group for all the bad decisions, namely a cussing journalist female, a fabulously gay man, an insecure brainy female, and a Mr Darcy, a formidable haven with a reindeer jumper (Colin Firth.

In an oversimplified version of Pride and Prejudice, our heroine is battered in a fully misogynistic factory of life, constantly opening her heart to a diary started on the first day of January (she held to it until year's end, kudos for consistency). Truth be told, this is not a fully family-at-a-dinner-table movie, but if you have ever felt compelled to shove a mouthful of potato salad in a relative's face when they ask when will you be married/due/finish colleague while wearing a carpet your mum chose for an elegant look, this movie is for you.

Tell the truth, a plot outline of this movie sounds like an oldfashioned joke because a Scottish Lieutenant, a French Lieutenant, a Jewish-German Lieutenant, a priest and two opera singers walk into a bar. Sorry, they make a truce on a Christmas Eve of 1914., eased with bagpipes and carols from their native lands.  A real event taking place on a no man's land, with a national opera star singing in front of German infantry, receiving applause from French soldiers thus served as a grateful line of work. Though a sour watch by the end, the movie delivers truly wonderful testimonials of brotherhood and loyalty being questioned by sheer human nature easily turning to a much-desired peace than bloodshed in the name of any land or leader.

Here goes another popular joke- there are ten actors in Britain and every now and they gather around and do a movie. All jokes aside here a series of unfortunate but absolutely hilarious events unfold as Daniel-played by a completely heartwrenching Matthew Macfayden- in charge of his father's funeral, welcomes his brother from America on their way to a family gathering. As the show must go on, so does this brilliant edgy story, spiced with some misplaced Valiums, alcohol-induced poor nerves and too many people gathered together to pretend they care, must-see its end, but not without a thorough humiliation to all standards. It's just like being back home to Kanzas, hopefully just without a dead body. Take it from someone who explained wedding customs of a reel at 4 AM to a Brit, this has the laughs you need.

One of the scariest scenes I have suffered to see has been that scene with Bilbo Baggins as he berserkly reaches for the Ring. Arguably, the second involves Glenn Close's cigarette holder, an oversized fur coat and a considerable bunch of puppies hurdled up in a shack as Dr.House - actor Hugh Laurie - and Mr Weasley are patching up the entrance gate (as you might tell, I am not the droid for horror movies). Most numerous Disney family with Anita and Roger famously bringing dog food to their spotted beloved, Pongo Perdita & 101co. threatened by a skin-thirsty Cruella deVil? Spots and pups and coats, oh my! Not quite festive, indeed, but more than a welcoming watch to anyone in love with a dog-human story with a happy ending and a bad lady baked in mud in the end.

Before Anna sang to Elsa to build a snowman, 90s kids had Jack Frost. Michael Keaton starred as an ever-touring musician who, after dying in a car crash, leaves his wife and son behind. Unable to keep his promises when he was alive, he gets a second chance a year later, as his son Charlie in a rage of grief makes a snowman in front of the house, wishing his father would somehow be there for him again.

Not a critically-acclaimed this one, but one likes to think of it as a sort of a hidden treasure when in doubt what to watch on those dreary middays between December 20th and 23rd. Besides, the Oscar season is yet to be upon us so bother the judgement as it is.

Few of you might say there are far too many romantic comedies with books as a coping mechanism on this list, and the one would be completely right. Alas, nothing like a bookworm burn between two complete strangers bonding over random AOL emails, as they unknowingly lead an on-stage battle of wits. Joe Fox of Fox Enterprise and Kathleen Kelly from Bookshop Around the Corner shed their lines forth and back in New York as mysteries to one another during the most part of the movie.

One a paragon of modern-day mega-bookstore chain with Starbucks milieu, the other a small family-owned bookstore with hand-made Christmas decorations and only one type of coffee, with Tom Hanks and Meg Ryan together handing in a perfect combination of wit and mistrust in a certified classic.

Let's be honest, we all strick our plans accordingly to have the evening free if Home Alone is on, regardless of the season. Having a home VHS version from the time my age was in single-digits number, the story of Kevin McCallister who likes extra cheese pizza and is left behind by his entire family who overslept is reserved for the whole of Christmas day as we move between cookies and too much gravy on the side.

Charles Dickens' classic about a stingy bitter Scrooge has seen many renderings on stage and television, the latest being due for 19. December in BBC's stellar production. A tad older animated version has Jim Carrey voicing the Scrooge's disapproval of the festivities as he demands rigorous work ethics with no extra spending on family traits. His lonesome gloom is broken up by three ghosts of Christmases Past, Present and Future, as he is softened up on a way to redemption. With the likes of Colin Firth and Gary Oldman, this version will have you popped up and ready with a page-to-page trueness, this story is a welcoming change in today's spending culture, reminding us that the true spirit of any day lies in our humility and willingness to help the fellow in trouble, regardless of their background.

There is a shy child in every town in need of late Robin William's Genie power to make him or she believe in the impossible. This Second star to the right! A movie about a boy who does grow up, old and forgetful about his adventurous times with a bad Captain Hook is an enchantingly tender childhood bliss. Sometimes it is good to have more than a full of fairy dust and travel to Neverland with Julia Roberts as Tinkerbell and Peter Pan who has regained his muchness in a food fight with the Lost Boys.

Name a more iconic duo than Alan Rickman with his blank face raging in front of Mr Bean actor Rowan Atkinson, as the latter is picking up a piece of jewellery in cellophane with cinnamon sticks. I'll wait. Also, told you, British actors just love to get together and make a movie every five-or-so years.

This British feel good and cry a lot at the end movie opens up with a Heathrow Airport, with lightened faces of those arriving and embraces for those leaving. The narration then intertwines as our characters and their lives (and husbands and wives) survive their countdown in December.

Liam Neeson as Daniel struggles with his stepson, after his wife's untimely death but lo and behold, a young man is in the pangs of first love. The newly elected Prime Minister (Hugh Grant) is somewhat smitten with his assistant Natalie as she naïvely forgets the bonton during their first introduction. Grant's on-screen sister Emma Thompson is found between sowing the costumes for a Nativity Play and her husband's (Alan Rickman) office infidelity. Rickman's colleague in the script, Laura Linney's Sarah is quietly in love with Karl, a sweetheart architect who reciprocates, though their love story is sadly unfulfilled. Another one such is in the shoes of Andrew Lincoln's pre-walking Dead role Mark towards Juliet happily married to his best mate Peter ( Kiera Knightley and Chiwetel Ejiofor). Oh, yes, and there is a Colin Firth as Jamie in his own misery as he discovers his wife's cheating habits with his brother. There is more but you better plug this on.