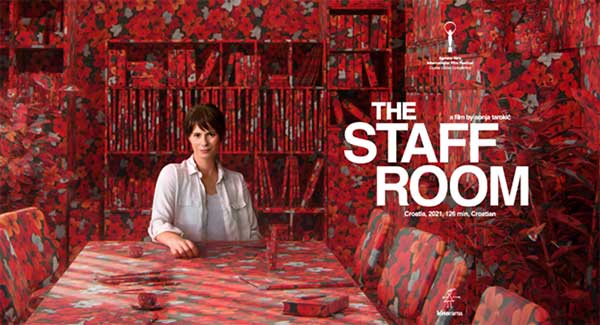 The Staffroom, directed by Sonja Tarokić, had its regional premiere at the Zagreb Film Festival

20-12-2021
The film Zbornica (The Staffroom), directed by Sonja Tarokić, had its regional premiere at the Zagreb Film Festival after its world premiere at the Karlovy Vary Film Festival, earlier this year, where it won main and Ecumenical Jury awards. The film showcases the struggle of an individual against a system in which everything causes divisions, and the main protagonist is torn between parents, colleagues, the state and children.

Faced with the limitations of the school system and surrounded by discouraged teachers, the new and enthusiastic primary school pedagogue Anamarija (Marina Redžepović) enters her personal struggle with a problematic history teacher, unaware that she is slowly becoming more and more like her classmates. At school, we were taught that if you want to destroy a society, you need to start with the education system. Judging by Tarokić's film, Croatian and South East Europan is already very ruined.

Going through the education system, for most of us, the staffroom was a sublime place where we could only step on exceptional occasions and where our moral verticals and people who need to teach us how to live a life, nobility and everything we need to adopt passing through the education system stayed. After completing their formal education, most of us never went to school again, nor will we, but Sonja Tarokić decided to take us back to that most important place from growing up in the staffroom, its focal point and deconstruct all our memories, or try to figure out why some things looked just like that, why we were guilty and when we weren’t, whether the grading could be objective and whether we went to the worst grade, as our teachers claimed. True, today kids are in contact with modern technologies, and much freer and more open than us, except that they can do ingenious things, with a bad education system and understanding of school only as an educational instance, without that educational component can turn much faster. delinquency, and to be permanently insecure, confused, unhappy… because of the school and the world they are immersed in.

However, classroom teachers are often much more infantile than children, they are wounded, unfinished and irritable, and the pedagogue in film (as well in real life) does not have the legitimacy to correct them, because she is not authoritarian and they believe that there is no need to introduce new practices or revise their achievements and relationship with children.

The older generation of professors believes that they should not keep up with the times and that the practices they brought from socialism do not need to be upgraded, and the younger ones simply suffer from anxiety, complexes, desires and ambitions to progress with as little commitment as possible.

Although the film does not have a central event around which the plot is woven, the majority of the film is dominated by the pedagogue's relationship with history professor Siniša (Stojan Matavulj) and the events that accompany one school year. Their dialogues, like most others, are shown in large, documentary shots, in which some protagonists feel insecure and unconvincing, unlike Redžepović, who gives maximum security and self-confidence while the camera follows her. In the background, we have the rest of the staffroom which, as we can conclude in the cacophony of sounds, is mostly discussed around trivial things. In all this cacophony, which is sometimes spiced up by the music of the band Lado, or adaptations/ covers of band Majke, some dialogues and moments are undeveloped and just turn into something else. Still, that in no way reduces the pleasure of watching but raises the need to recognise the situation through our own experiences, based on struggles with the system and rigid colleagues around us. The same could be said in the case of the nun who only appears in a few shots throughout the film, but makes it clear to us that faith has entered the school deeply.

Through the Zbornica, director Tarokić exposes many (or maybe even all) of the problems of the educational system, but also society in general. Her film is one of the latest directorial works of this kind. It fits perfectly with Don't Look at My Plate, by Hana Jušić, Mater by Jure Pavlović, and documentary One of Us, by Đuro Gavran. This new generation/ trend in Croatian film enters deep within psychoanalysis and without too many events and locations expose modern societies of Croatia and a region that is divided between traditional norms and modern trends, democracy and freedom of choice under which we underline all our dirt and actions that are not allowed.

The director of photography is Danko Vučinović, the editor and sound designer is Borna Buljević, the set designer Tajana Čanić Stanković, and while the costume designer is Katarina Pilić.