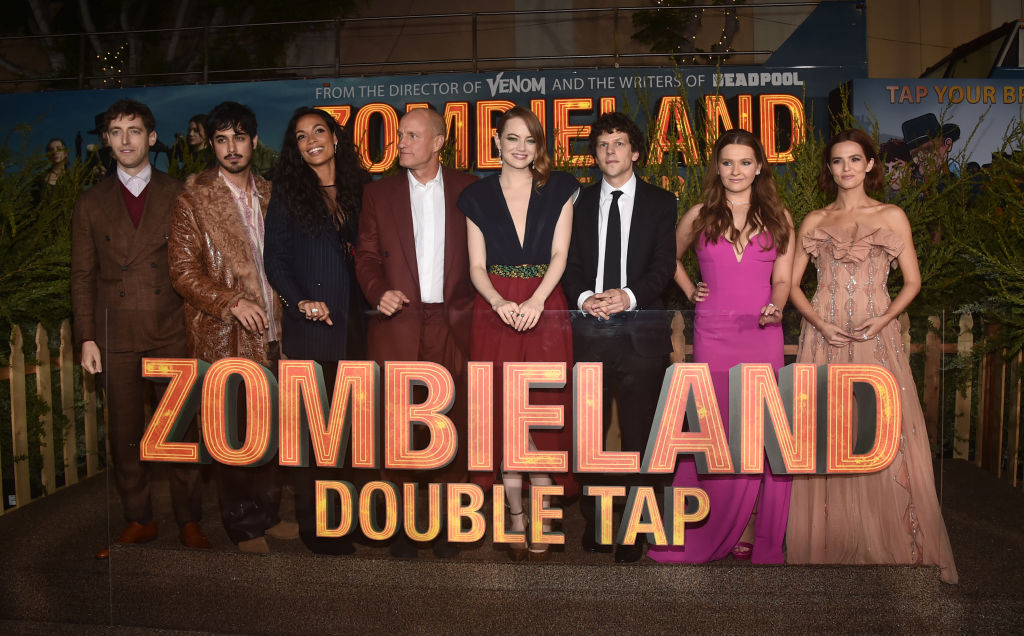 Have you heard of Wichita, Tallahassee, Little Rock, and Columbus? If so, you know these names mean top fun. But if you haven't looked at Zombieland. Are you late? You just arrived in time for the sequel - Zombieland Double Tap. If you watched Zombieland ten years ago in 2009, it's great. If not, don't despair. You can watch the sequel unknowingly, they are the same characters - ten years older, but it is not complicated to connect everything in five minutes. It's not a complicated movie. It's important to kill zombies while having fun. It's fun for viewers as well. Although more prone to the 'smart' humor, they have some suspicions worth to look at all Zombieland Duble Tap? I have no doubt the humor is grounded, physical, don't complicate much. He gathered the same team with some reinforcements and repeated all the good gags from the original. Success- guaranteed!

All crew from the first movie Zombieland reunited!

The White House is not completely abandoned after the zombie apocalypse. Columbus - starring Jesse Eisenberg - just at the White House asks Wichita - starring Emma Stone - to marrie him. Wichita decides to escape, and with her Little Rock sister - starring Abigail Breslin - leaves Washington and sets off looking for adventures. Columbus follows them in the company of a mentor and best friend Tallahassee - starring Woody Harrelson. Along the way, they kill dozens of zombies, eventually reaching Graceland. Tallahassee is ecstatic. He is the greatest surviving fan of 'King' - Elvis Presley. But the girls had already left Graceland and headed for the neo-hippie Babylon community. Their path is interspersed with Madison, pinky Barbie - starring Zoey Deutch, Nevada - starring Rosario Dawson, and duo Albuquerque and Flagstaff - starring Luke Wilson and Thomas Middletich. Babylon arrives just as many hordes of zombies led by the T-8000 - Terminator Zombies - are faster and smarter than ordinary zombies. The following is the showdown with the spectacular killing of a bunch of zombies, and the journey continues.

Homers are so dumb and slow, but T- 800s are dangerous, almost smart zombies.

The action is not complicated. Its heap of humor and they are a little more physical type. The real thing is the characters. The excellent Woody Harrelson leads a great cast of actors. Added value is a goofy blonde who is hilariously funny - great Zoey Deutch. Luke Wilson, Thomas Middletich are more or less wandered into the movie. Well, we won't be too bothered. The best part of the movie is as in the first part - Emma Stone, which does not try to be funny, but with its cynical comments, especially at the expense of 'Barbie' - Madison, raises the level of the movie one step higher. The actors had a good time on the set, as seen in the film. After all, Woody Harrelson told director Ruben Fleisher after filming Zombieland 2009: "I never want to star in sequels, but this is the movie I want to perform in." The atmosphere that adorned the original Zombieland from 2009 carried over into the sequel. Which is nice to see at the box office. So far, the film has earned $ 121 million. And since it only opened in mid-October 2019, the story is not over. The film was made in collaboration with Columbia Pictures - the production, and Sony - which is responsible for the distribution of the movie. If total earnings come in at $ 200 million, which is not impossible, since Blu - ray has just come out on Christmas Eve 2019, I wouldn't be surprised if there is a Zombieland 3 in the future?