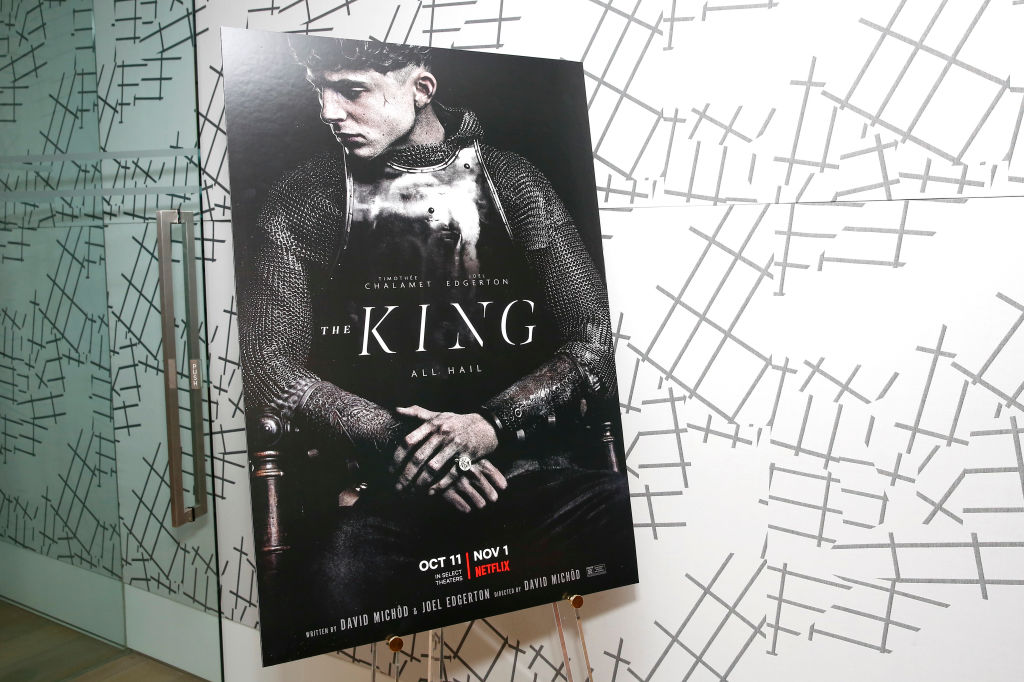 Following the path to success paved by Game of Thrones, it seems that most movies these days are influenced by it one way or the other.

Following the path to success paved by Game of Thrones, it seems that most movies these days are influenced by it one way or the other, mostly by adding elements of magic and supernatural to the mix. Dramas that try to closely follow real historical figures and narratives are on the decline as a whole, but now and then there comes a movie with the ambition to make the bygone ages relevant to us by showing us all of ugliness and grittiness of it – to make real history popular once again by adhering to three factors: casting popular actors in the main roles, following the popular events from the history already embedded in the societal consciousness, and by filming it in „realistic“ desaturated tones effectively deglamourizing the whole thing. One such film is The King, the latest work of David Michod, whose oeuvre is at the moment consisting of two crime dramas, one war comedy and a couple of documentary shorts. One thing that connects all those movies is the theme of masculine toxicity, where the characters are often put into bad situations by the predominately male environment that surrounds them.

The King, in part based on William Shakespeare's Henriad and in another part on the real historical accounts of Henry V's rule, is a movie that continues that trend. We meet young Hal – Timothée Chalamet -  as the unruly teenager eager to hedonistically enjoy life away from the court of his father, King Henry IV. His only friend, a jaded and drunk former soldier Sir John Falstaff  - Joel Edgerton -  is there to aid the young prince in this endeavor. But as it often happens, soon comes a time when Hal needs to grow up and succeed the throne of England after his father's early demise due to serious health problems.

Casting Timothée Chalamet as young king Henry and  Robert Pattison as his French adversary The Dauphin is an unusual casting choice for the historical movie like this one, and it seems more like a marketing decision to rise the general appeal of the movie. However, that is not to say that some of the actors are not excellent in their roles, especially Chalamet. His king Henry is both subdued and unrestrained at the same time, with a constant aura of uncertainty flickering in his eyes. He is a modern man surrounded by the medieval compatriots whose ways are at first strange and abhorrent to him. However, like in previous Michod’s works, he is a victim of a traditional male worldview which he must learn to accept or he is bound to perish. His friend Falstaff, who acts as Henry’s moral compass, explains: “A king has no friends. Only followers and foe”.

It is no wonder that his betrayal of Falstaff, whom he casts aside as soon as he steps into the role of a king, lingers guiltily on Henry’s troubled mind. Without Falstaff he becomes like a lone ship in a storm, desperately searching for the lighthouse to show the way. Edgerton, like Falstaff, is equally compelling, the hurricane of emotions. As the war with France draws closer, he becomes a shadow of his former jolly self, his fear and hatred of war pervading him. Edgerton, at times, seems to be channeling unforgettable Orson Welles as the titular character from his masterpiece Falstaff  (Chimes at midnight), devouring screen with his presence and subdued authority.

But it is not Falstaff who stirs the change in Henry, but the Dauphin, french prince and heir to the throne. Robert Pattison does not deliver bad acting, per se, but his presence seems unneeded as he draws too much attention to himself and not enough on the character he’s playing. The Dauphin is a caricature in an otherwise very subdued tapestry of characters in the movie. His only purpose seems to be to draw the ire of both audience and prince Henry, both for his ridiculous over the top acting as well as the poor script that does not give Patterson any decent lines.

Michod also seems to be at least partly inspired by the aforementioned Welles’s movie, as his running motif seems to be to provide us with the gritty, bloody and down-to-earth show of medieval life including the big fights. The highlight of the movie is by far the Battle of Agincourt which underlines this desire in the best possible way – by creating a memorable and powerful battle scene which more closely resembles a combination of mud wrestling and pigsty then heroic encounter between two warring sides. The armor is too heavy and clinky, the fighters are out of breath and the encounters never seem to be fair or predictable. With the stench of death lingering in the air, it seems like a desperate fight for survival rather than a strive to make a victory in the war.

This realism, however, does not completely translate into the characterizations as well. Whilst their actions speak volumes and their motives are usually shown, the characters do not have enough time to breathe as the pacing of the movie is mostly dictated by the fight scenes rather than a natural progression of the narrative. Is it realistic for a mischief black sheep of the family, Prince Hal to suddenly embrace being a righteous king of England? Certainly, with enough background motivations and current happenings in his life that might influence him to behave that way. However, in the movie, we get only cliff notes of those important character arcs. Rather then building the story around them it seems that the story is happening in spite of them.

Michod’s “The King” is a decent historical piece that quite evidently lacks the recognizable author's signature to elevate it above mediocrity, despite some outstanding acting. Whilst this movie might be an important stepping stone in the career of David Michod, it is just a run of the mill business for main stars, as a busy year is ahead of Chalamet and Patterson. Chalamet is currently starring in three highly anticipated upcoming movies (new films by Greta Gerwig, Denis Villeneuve, and Wes Anderson) and Patterson is playing as a titular character in a new Batman movie just titled The Batman at the moment.