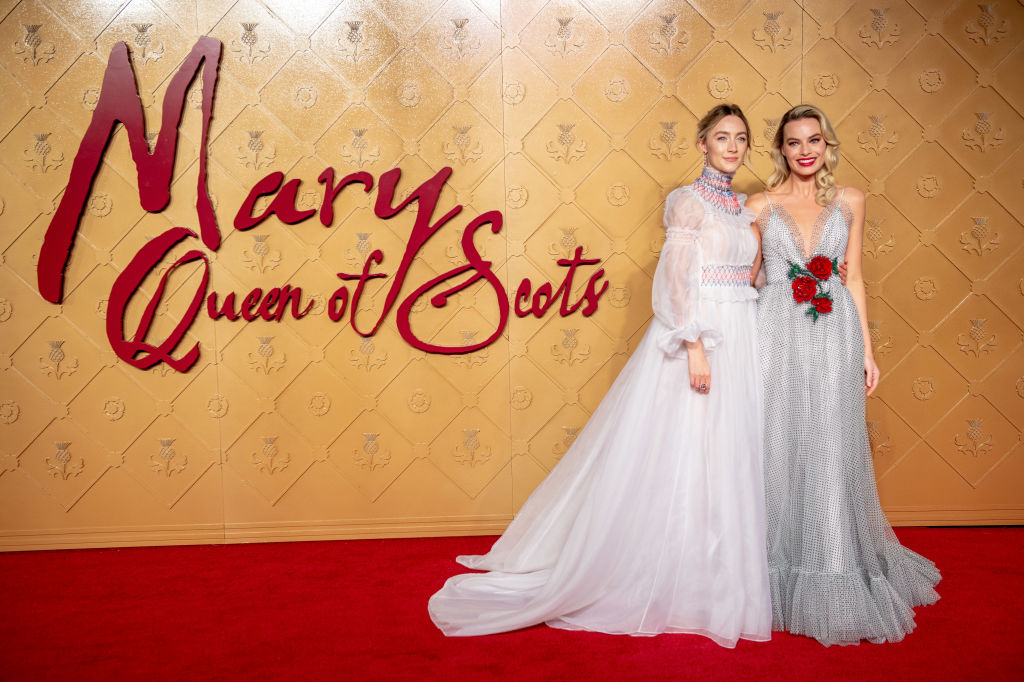 When women are wearing crowns.

"How cruel men are."

(Queen Elizabeth I of England  in Mary, Queen of Scots)

Pale under the first morning light, a woman walks ahead clad in black. Opening before her is a path and curious crowd as she ascents to a decapitating throne. No guilt escapes on her, even the acceptance of fate seems well behind her as with one resolute movement she casts away thick coat revealing a bright-red gown and a shining neck bowing with one last prayer. One more cut and the frame unfolds almost twenty years backwards as the same Mary, Queen of Scots arrives in her homeland saying grace to the Lord above sinking in the coast's fine sand.

In a picturesque, vibrant synergy with northern vibes and stone halls, Josie Rourke's rendition of a turbulent relationship between Mary Stuart and Elisabeth I joins historiographical narrative and splendidly accurate visual atmosphere as Saoirse Ronan and Margot Robbie's aforementioned respective royalties claw their marks into the soil of a single continent. Though based on a bestselling biography of the said Scottish Madam, it fails to deliver the full strength of a story as the plot sharpens and declines through attempts to conquer the vision of both sides.  Leading Donmar Theatre with 2014. Coriolanus and Tom Hiddleston and Saint Joan with Gemma Arterton, Rourke is no stranger to a carefully crafted histories depicting resistance amidst the web of deceit and falsehood, her latest piece here being a sour comeback of a Scottish Catholic Queen whose sisterly English equal would have her first introduced, then subjected and much later murdered for treason.

History is written by survivors and those who claimed their loyalty subsequently. As they have uncovered the grave of Richard the III in Almeida's 2016 production of the said, sinister King, the questions arose doubting his long famed malice in favour of his enemies. The evidence of Queen's true nature is dimmed by centuries past with strong polarized energy dividing two countries and their streaks of glory. Welcomed by her half-brother James after France has seen her widowed, Mary takes up the Scottish throne only to discover the deep enmity within her family circle and her subordinates on terms of religion and patriotic loyalty. Heavily won peace is on thin ends with London's Privy Council with famed Lord Cecil - actor Guy Pearce - and Randolph - actor Adrian Lester - almost immediately narrowing the coil of the newcomer, a legitimate royal. Mary being a legitimate English-born royal brings ill forces to Anne Boleyn's only daughter, and her defiance to bend the knee is heightened by her rejection of Protestantism. Scottish Reform led by David Tennant's John Knox will pose here an arena of judgement, providing the movie with a heavy questioning of a woman in power and the extraction of order build on religious interpretations conquering the audience.

With an astute possession, Ronan delivers a performance of utmost grace, with fierceness so poignantly precise and a taste of gleeful youth that brightens from time to time the gloom of 16th century intrigue. Her Mary is no stranger to curt replies of a cold-headed reasoning as the relationship with Elisabeth is born over letters. The latter monarch only too aware of the true identity of Mary's, has been disposed to a dialogue only to begin with demands for an appropriate marriage between a Scottish lady and an English nobleman.

Notwithstanding the request, Mary marries Darnley, another Stuart with a considerable demand on a throne, producing not too long after a male heir whose godmother is none other but Elisabeth herself. In spite of willfulness, there is a genuine respect and a silent mutual understanding between two sovereigns, their fates being too closely interwoven with abandonment and courts with too many rules and dedications to follow. However, amidst the men of reasonable power, the main line of communication becomes submerged in political intrigues and personal vengeance, culminating ever more with Elisabeth's urge to secure her realm of power by giving leave to a civil mutiny first and then to Mary's condemnation in a solitary.

Mary, being exposed to a maternal and conjugal part of life, scared and mesmerised in equal measure, has been met with a line of condemnations from both ends, being slandered as a whore and an ungodly woman before her subordinates finally disown her entirely. Margot's grief-stricken Elisabeth beautifully rounds the ending as the men's long line of murders and treasons see Ronan's vigorous Stuart being brought to a justice of a scythe.

Though the movie was put to test by critics and audiences for its historical inaccuracy (from depicting Mary and Elisabeth fictitious meet to Mary's husband's intercourse with a suitor at court) the movie strikes with its rare power of astute humanity between the cloak of reign. History is but a cruel teacher to the world condemning one gender for acting too strong for their time, but it is satisfying to see a promise of equal eternity from a royal to a commoner, a fierce song of highlanders echoing through the hills and a woman riding ahead an army of men.