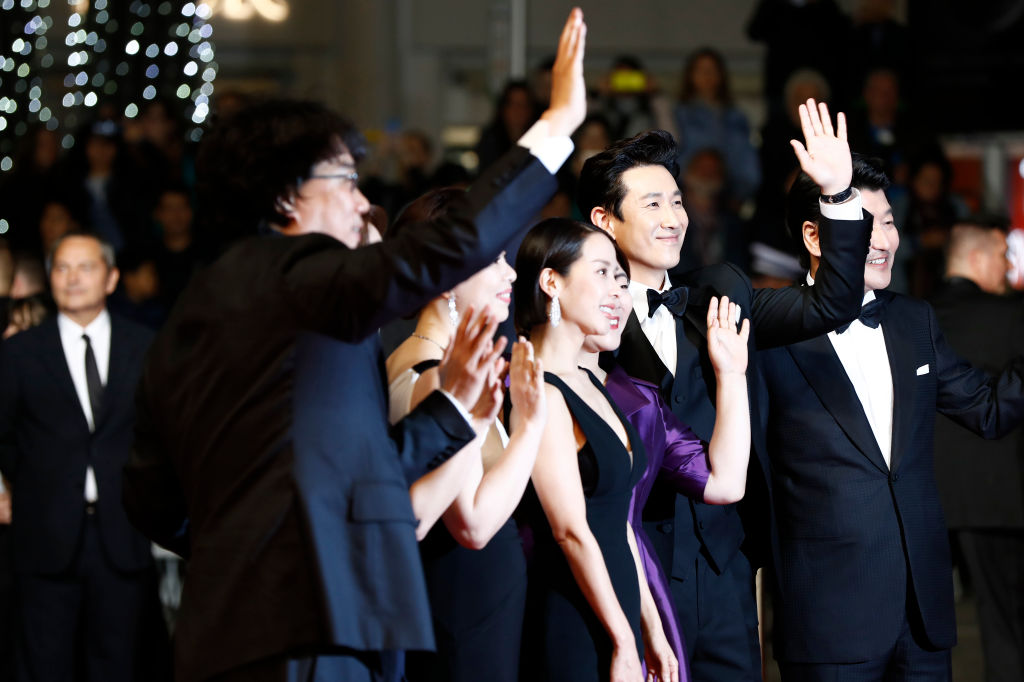 Dark images of working-class, crawling beneath the colourful comedy

In the basement apartment, a young man, in his early 20's is trying to catch the wi-fi signal from his neighbours. As he is strolling around the small place, with this hand up to a ceiling, his mother and sister are getting concerned, because they are waiting for an email from pizza store they are stacking boxes for.  His father believes in him and guides him with advice until finally he is connected to the internet and all four family members sit on the floor and start folding the boxes. As a disinfection service is strolling down the street nearby, a father tells the others to keep windows open,  so they can additionally get their home cleaned out of parasites. The opening minutes of the latest work of Korean masterful director Bong Joon-ho awoke laughter and concern, and it is all just the beginning of much more complicated and way funnier film.

Parasite follows a bright and resourceful Ki-Woo - starring Choi Woo-sik - a young man living in a cellar, with his several years younger street smart sister Ki-jung  - starring Park So-dam - a farouche but friendly mother Chung-sook - starring Chang Hyae-jin - and the lucidly optimistic father Ki-taek - starring Song Kang-ho -. The family is trying to survive with the minimum wage, working low scammy jobs till the day Ki-Woo’s gets recommended by his friend, who is moving abroad for studies, to a rich family Park to teach English to their spoiled teenage daughter. As Mr. Park is a businessman who earns a great deal of money and can afford a driver, a home assistant and everything Mrs. Park wants Ki Woo comes up with an idea of ​​how to get his family out of poverty.

The first portion of the film, Bong Joon-ho dedicates into building contrast between the worlds of Park's and the unfortunate family of Ki-woo.  Throughout marvelously elaborate comical employment of Ki-woo's family to Park mansion, we get a glimpse into the layers of shallowness as well as into desires that each member of these two families has. The most spectacular employment fraud - making the mother, Kim Chung-sook, into the housemaid - leaps into hilarious  Soderbergh's-Ocean's-trilogy-alike masterplan, that in a background unvails us the deeper mental profiles of the characters.

But as this initial contrast between the two families soon disappears,  with the "rise of wealth and prosperity", Joon-ho leads us from light comedy to a dark, horror-alike mystery in the second part of his film.

Parasite succeeds simultaneously to be a socially relevant drama, wonderful comedy as well as a dark mystery that, in addition to all over-the-top moments, remains quite realistic. It sounds absurd just to say something like this but the film juggles with a multitude of genres, trough the transformation of dynamics that takes place, quite naturally. By following the emotions and natural progression of minds, Joon-ho's film never gets redundant, or predictable while occupying the viewer's attention at all times.

Another interesting aspect of the film worth exploring is the triple structure of the Park’s house. For a large part, the way characters are moving around the house, they fit their socio-economic order - poor, working-class, bourgeois-. Another way to read the basement, ground floor and first floor of the house could be accompanied by classical Freudian reading, where each floor reflects psychological states - id, ego, and superego - characters are in.

Could this be the film of the year?

As the supreme culmination of Bong Joon-ho’s work so far, Parasite has a sharp critical approach to the important social topic while it manages to entertain with an easy, humorous and yet genuine story. An illustrative representation of the class struggle, both in Korea and in the world, vibrant and entertaining action scenes that engage the audience and a series of fitting twist, are some of the reason why, besides this year’s exceptional Cannes films, it earned Palm d’Or and it seems this is just the start of the rise to glory.

NB: Besides Palm d'Or for the best film at Cannes Film Festival, Parasite is nominated for 3 Golden Globes ( Best Director, Best Screenplay and Best Motion Picture - Foreign Language) and Screen Actors Guild Award for the Outstanding Performance by a Cast in a Motion Picture.