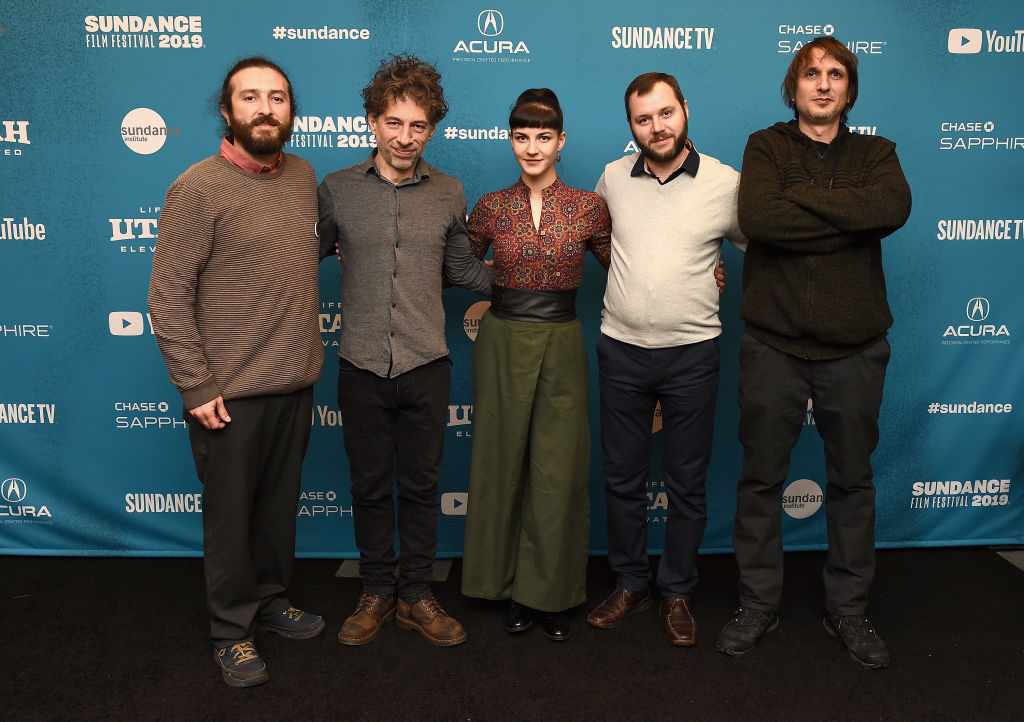 Stunning Macedonian documentary on nature of (wo)man and bees

The woman, in her 50's, walks across the vivid dusty wasteland and up the stony mountain. Her skin is dark and crackled from the sun, her bright oldfashioned green headscarf, yellow shirt, and brown skirt are implying she is a villager. Her name is Hatidže and as she climbs up to the edge of a mountain path, the quick buzzing sound starts to rise. Suddenly, Hatidže removes one of the large rocks uncovering the wild beehive. She takes half of the honeycombs, packs them in her basket and a cloth roll, leaving the other half of the bees in their peaceful natural habitat. The opening minute of Honeyland, North Macedonian documentary by Ljubo Stefanov and Tamara Kotevska showcases the stunning but yet simple central theme of the film, the balance between (wo)man and nature, that care of one another.

The film follows the lone life of Hatidže in a remote part of Macedonia, that provides for herself and her partially paralyzed mother from beekeeping and taking gentle, good care of a few animals they have.  Never married, her peaceful life gets exciting every now and then when she travels to Skoplje to sell gathered honey (once again taking one half for herself, leaving one half for her bees). Than, one day, the vile nomad family shows up in Hatidže's remote village deciding to settle down, and start with their own new, yet undecided business.

The ubiquitous balance of nature

What strikes the most about Honeyland is its story that is really hard to believe to be a mere play of luck and coincidence. In the center of the film, there is a woman in a struggle to keep on the balance with nature, against the newcomers that she welcomes, while all they do are take, disrupt and damage. It just amazes to see the way these people behave even though there is an eye of a camera beyond them. Nomads openly mistreat their herd of cows, shockingly take bad care of their chicken and an eye of a more observant viewer might even notice the gradual decline in the spirit and physical appearance of a small kitten. So when these people decide to get into the bee business it is obvious from the start that the things can't end up in a good way.

But there is more to the Honeyland than this pure meditation on balance with nature. Directors Stefanov and Kotevska capture Hatidže's life in a small cabin with her decaying mother. Right here, the film gets yet another, splendid layer, of a story as the beekeeper in the sanctuary of her home opens up and self reflects on her past life, questioning who she is, how her life be if she actually married, and what would happen if she actually left the mostly abandoned village.

The honey golden view of a camera

As much as the story, the cinematography of Fejmi Daut and Samir Ljuma plays a rather significant role in this film. The cinematographer duo manages to capture the pure, raw energy of nature, focusing and giving a primary role to natural light and getting the most out of the honey golden colours they were surrounded with. By doing so, they brought out the genuine and also sincere tone of events that unfold in front of our eyes. Probably the bravest move here was filming inside a dark cabin Hatidže and her mother are living, where the only sources of light are just a small window and a candle.

Overall, Honeyland is a marvelously crafted piece of work that manages to capture the raw essence of curious unseen life of a simple, yet amazing Hatidže, the last wild beekeeper in Europe. With the story that unfolded in front of the directors' eyes and the patience of staying behind the camera over the seasons and not interrupt or intervene even in the toughest moments, this film showcases the often-forgotten power of documentary filmmaking.

NB: Honeyland won Cinematography Award, Grand Jury Prize Award as well as World Cinema Documentary Special Jury Award at the 2019 Sundance Film Festival. It was also selected as North Macedonia's entry for the Best International Feature Film at the 92nd Academy Awards, so far making it to the December shortlist.