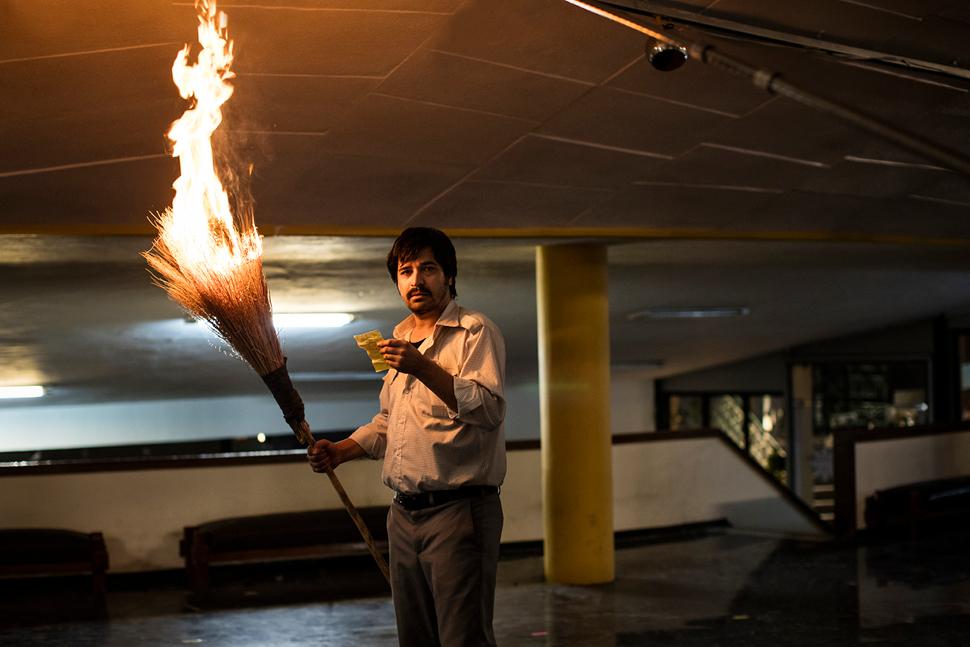 Careless Crime - A film about film with intense and exigent emotions

In 1978, the Islamic Revolution that broke out in Iran overturned the regime inclining towards Westernization and secularization, creating the conservative Islamic nation that is still relevant today. In the midst of this revolution, angry people rushed to Cinema Rex, where the film "The Deer" by Masoud Kimiai, a famous filmmaker since pre-revolution, was being shown, and set it on fire. It was seen as a symbol of Westernization. More than 400 lives are killed, still remembered as part of Iran's sorrowful history. And a surprising attempt to bring this abominable past to life now is Shahram Mokri's fourth feature film "Careless Crime", premiered at 77th Venice International Film Festival.

The film follows the dailylife of a nameless man (Mohammad Sareban, excellent in silence). He goes to a pharmacy to buy some pills, but the ones he wants are not there. He wanders around the city for them, and after some twists and turns, he meets three men who head to the cinema to achieve some sinister goal.

Mokri and cinematographer Alireza Barazandeh try to capture reality with breathtaking, ghostly long-takes which are reminiscent of Miklós Jancsó and Cristi Puiu's technique. The nameless man converses with a pharmacist for medicine, he walks around a film museum, and the three of them discuss something in the cinema, all of which are observed with a frigidly clever gaze.

Mokri's films are characterized by a thoroughgoing realism like these sheer long-takes. His second feature "Fish & Cat", for example, was an ambitious 130-minute single cut about college students murdered at the hands of murderous cooks who use human flesh in their dish. The film won a special mention in the Orizzonti section of the 2013 Venice Film Festival. Moreover, the third feature "Invasion" also continues the long take like in the previous films, expanding as a soaringly apocalyptic crime film. And this suffocating realism is the core of his film again, yet being deepened abysmally.

Furthermore, these long-takes are accompanied by impactful sound reverberation. For example, the sound of the man's footsteps, of a car on the road, of a lighter exploding when lighting a fire and the sound effects of a movie on the screen. Such diverse sounds have an eerie presence which come close to our eardrums. Sometimes like a spectre, sometimes like a deluge. And we should not forget about the music. The experimental music created by Ehsan Sedigh is composed of a disturbing cacophony that shakes our ears with the aforementioned reverberation.

Then four of them head to the cinema, and at first watch a movie in a room full of people, but the nameless man leaves. When he goes to the bathroom, he takes out a lighter, holding up a fire while checking the wall. He is clearly trying to set fire on the wall. So these men are the ones who are trying to set the cinema on fire, forty years after the revolution.

The director continues to follow the trail of their crimes in an outrageously matter-of-fact way. After an unsuccessful arson attempt, the four men leave the theater, going to another one. As the film repeats this process, we continue to wait for the moment when the arson is completed. While the story unfolds, the precision of the long-takes become more acuminate and the atmosphere becomes nauseatingly suffocating. Why do they want to burn down the cinema? It is never explained. And four men, whose heart is like an enigmatic dark matter, crawl through the city.

But this film's unearthly rhythm is more than the one within so-called crime films. A film is screened at the cinema where four men go, which is named "Careless Crime" directed by Shahram Mokri. However, the content of the film is different from this one which we are watching. A group of soldiers go deep into the mountains to search for an unexploded missile, coincidentally meeting some people who want to screen the film outdoors. While this film-in-film also features mainly on long-takes, there is a sense of freedom which is not present in the main film. And the story of the army looking for unexploded ordnance is told with the one of four men planning to set themselves on fire at the same time.

Nowadays the Coronavirus makes it difficult for us to go to the cinema, and what strikes our retinas in this film is the cinema full of audiences. There is really no room to stand up and audiences watch the same movie. Some of them are even smoking. However, this sequence which might be charming is not easily connected to nostalgia for the movie theater. In fact, it seems as if a bizarre malice was stirring behind the screen.

"Careless Crime" is a film about film, although it is not a film about love for cinema. With this film, we are capitulated to face the abominable darkness that lies between Iranian history and cinema. This darkness has a punitive, tremendous force to further inflame our despair of the Coronavirus crisis surrounding the cinema itself. To be honest, I still don't know how to interpret this film. But "Careless Crime" is a film with intense and exigent emotions which throw audiences into such vehement, aggressive ambiguity.