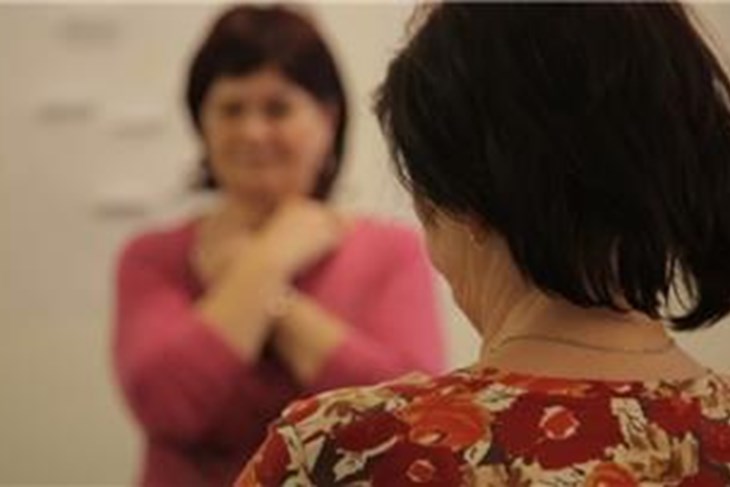 Bigger Than Trauma - ZGDOX review: The hope that one can overcome trauma

Last night ZagrebDox had the world premiere of Bigger Than Trauma by Vedrana Pribačić and Mirta Puhlovski, which, despite the difficult topic of rape in the Homeland War, gives hope to all those women who still keep this trauma to themselves, that they can overcome it.

Although the war is mostly a male issue and the suffering is male, here we see how many women, mothers, sisters, wives suffered in the war… some of the film's protagonists did not resist bullies to save their daughters and mothers because if Serbian soldiers find out they are there, they could end up in their hands.

The film follows a group of women who have applied for group therapy of an extraterrestrial systemic structural constellation, and with the help of experts and support from each other, they ought to try to overcome the trauma of rape, and guilt and accept themselves. In the beginning, women are sceptical that therapists and crew might use them, however, over time, changes are noticed as women begin to open up and control themselves more and more confidently, go to social gatherings, set new life goals, and have ambitions…

The film opens with Đurđica, that tells her story. To Đurđica, at the moment of the traumatic incident, nothing was more important than that her twelve-year-old daughter sleeping in the next room doesn't hear what is happening... In the beginning, another victim Marija was someone who opened up the hardest, describing everything around her as chaos, and later she became someone who helps other people. It seemed to Ana that everyone was afraid of her because she was a Serb, although that did not help her in the war. After all, she also went through the torture inflicted on her by Serbian soldiers. The head of the therapy, Marija Slišković, reveals that she conducted a similar procedure with three groups of women, one group was also men, but never got the support of state institutions to institutionalize her initiative.

What was the primary task of the experts when the women came was to regain trust, because, after the war and everything that happened to them, they no longer trusted anyone. Going back to those moments, many point out that they were just shocked then and that there was no room for fear in the need and desire to survive, and that feeling only developed over time, as well as memories of controversial events that cause nausea. Work on yourself, that healthy part that is stronger than any trauma, which the authors wanted to emphasize in the film. Therapies were often playful and pleasant, and sometimes very painful and traumatic, but for them, it was the first step that changed their lives, and after which they began to regain trust and establish new relationships with people.

Watching the film, sometimes with chaotic camera movements, and quick zooms on the protagonists' faces, we see what they went through while working on themselves. This technical chaos makes the film even more charming and sincere, and since the cinematographers immediately recorded the sound, so that the equipment would not interfere with the therapy process, the dojo sounds added to the editing complete this story and completely change the viewing experience.

Twenty-five years after the war women who survived torture, rape, and murder of loved ones continue to be traumatized. The film follows a group of participants in a three-year therapy program as they share their life stories, face the traumas of the past, and seek healing. Along with one Serbian woman in the group, the issue of nationality is another burden that Katica, Ana, and Marija will have to shed to turn to the future and embrace the joy of living again.

The film was shot for three years - two years of the program and another year of filming their private lives, and they spent another two years in editing and workshops. The documentary Bigger than Trauma has been accepted into the program of the prestigious HotDocs, which is a great recognition. It will soon be followed by a premiere on HRT and cinema distribution, and will certainly arouse interest in the entire region.

Apart from Vedrana Pribačić and Mirta Puhlovski, who wrote the script and directed the film, cameraman Dario Hacek, editor Marta Broz and sound designer Tihomir Vrbanec also worked on the film. Mirta Puhlovski is the producer of the film produced by Metar60, co-produced by Croatian Radiotelevision (HRT) with the support of the Croatian Audiovisual Center (HAVC) and the City of Zagreb.