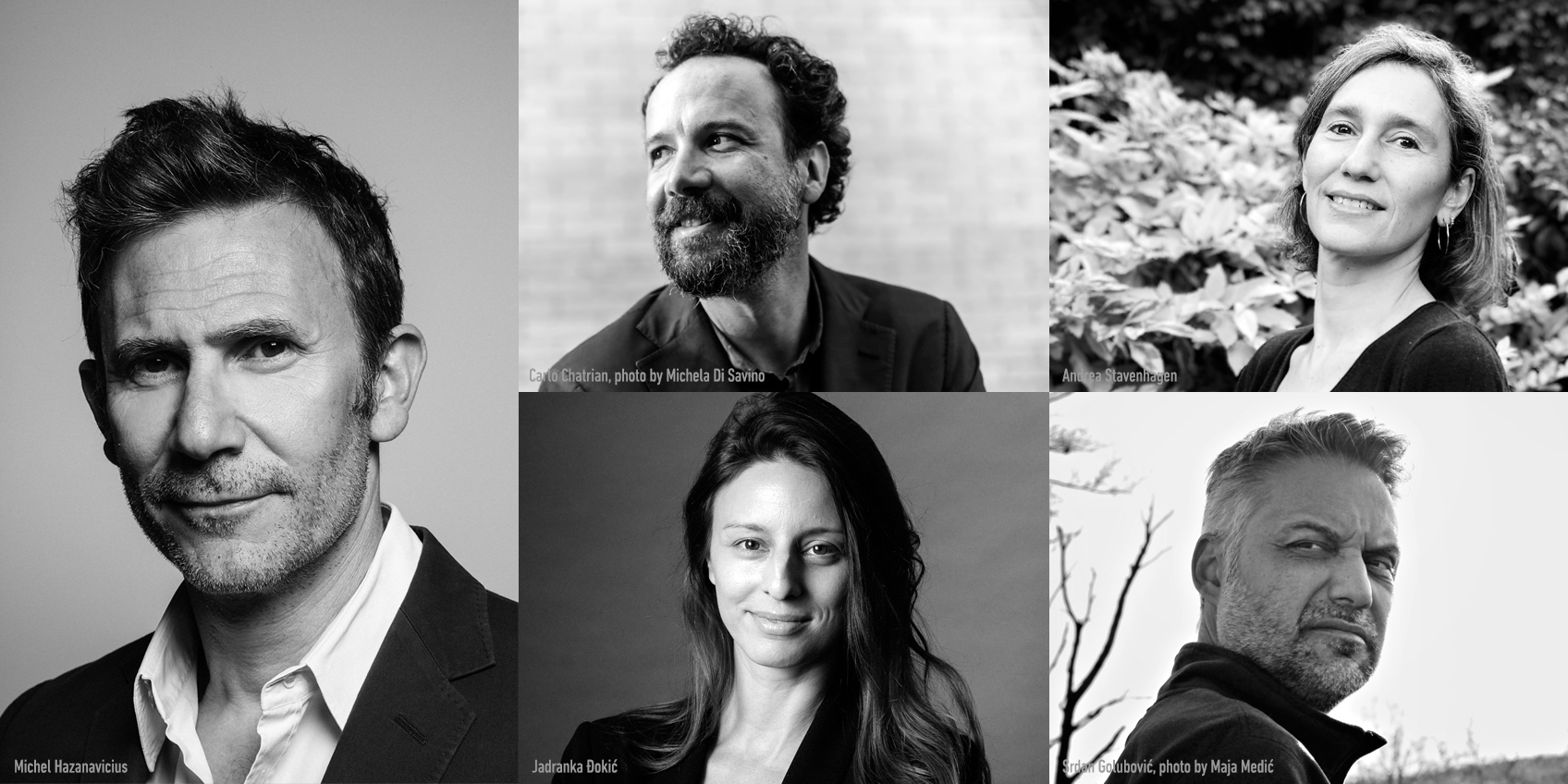 26th Festival in Bosnia and Herzegovina's Capital welcomes its Jury

The foothold of European Film festivity will be held in Sarajevo, still, this year. As one of the rare surviving festivals in the times of COVID/19 still devoted to its programme, the SFF unveiled today its Jury for the Competitive Part of the capitals 26th film festival.

Screenwriter and director- Michel Hazanavicius (the president of the Jury), the artistic director of the International Film Festival in Berlin Carlo Chatrisan, actress Jadranka Đokic, actor and director Srđan Golubović and Industry Department and Morela Film Festival manager Andrea Stavenhagen are this year’s Sarajevo competitive Jury members as of today. Their votes shall take charge in deciding about this year’s winners of the Heart of Sarajevo, and the winners shall be named on the ceremony taking place on August the 20th in Sarajevo’s National Theater.

This year’s Jury President, French writer and director Michel Hazanavicius was born in 1967. In Paris. After his art studies, he directed commercials and television programmes. After completing his first short movie, Eches au Capital and collaboration on several screenplays, he makes his first long-feature movie Mes Amis in 1999. His next feature, OSS 117: Cairo, The Spy’s Nest: Lost In Rio is due to complete in 2009- Two years later he is making his muted black-and-white The Artist starring Berenice Bejo and Jean Dujardin. The movie won five Oscars in 2012. Including the golden statue for the Best Movie, Best Director and the Best Actor award for Dujardin. Bejo had received a nomination as the Best Supporting Actress. The Artist swept away the award season winning three Golden Globes, seven BAFTA awards, Best Actor Award for Dujardin in Cannes 2011., where the movie premiered. A year later he is making one part of Unfaithful, in 2014. he is completing The Search and, in 2017. Redoubtable. Most recently he has completed his seventh feature, the 2020th The Lost Prince with Berenice Bejo and Omar Sy.

Carlo Chatrian is the Artistic Director of the Berlin International Film Festival. Born in 1971, Chatrian studied literature and philosophy and also holds a degree in film studies, with a thesis on the films of Jacques Rivette. While at university, he started attending film festivals as a natural counterpoint to his studies and soon after began programming for the Alba Film Festival, followed by the Festival dei Popoli and Visions du Réel. At the end of the 1990s, he focused on documentary as a genre, language and a way to compose and shape reality and held workshops with filmmakers such as Johan van der Keuken, Frederick Wiseman and Errol Morris. In 2003 he began working for the Locarno Film Festival where he curated retrospectives on Japanese animation, Ernst Lubitsch, Vincente Minnelli and Otto Preminger. Between 2013 and 2018, Chatrian was Artistic Director of Locarno where he enjoyed programming popular films for the 8,000 viewers in the Piazza Grande as well as auteur films for an even more cinephile audience. He had the pleasure of presenting awards to masters of cinema such as Michael Cimino, Werner Herzog and Agnès Varda. He honoured the French Nouvelle Vague with tributes to Anna Karina, Bulle Ogier and Jean-Pierre Léaud, and German cinema with “Beloved and Rejected”, a retrospective of post-war West German films, as well as with special awards to Armin Mueller-Stahl and Mario Adorf. In addition, during his six editions at Locarno, filmmakers from East Asia (Lav Diaz, Hong Sangsoo and Wang Bing) and the American actress Brie Larson were recognized and received prizes.

Born in the city of the most beautiful open-air cinema, Pula, Croatia, this years’ Jury member actress Jadranka Đokovic earned a Master’s degree at the Academy of Dramatic Arts in Zagreb. As a second-year student, she had her first prominent role in “Fine Dead Girls” by Dalibor Matanić.

Since, she has been constantly working balancing her theatre, television and film expression working with many renowned national and international directors. She currently holds the position of the leading drama actress at the Croatian National Theatre and shares her knowledge and experience as an assistant professor with students of the Academy of Dramatic Arts in Zagreb. Her work has been recognized by a series of awards such as this year’s highest national award “Vladimir Nazor” for her performances in “Three Sisters” and “Idiot”, and Golden Arena for the leading female role in “Behind the Glass” by Zrinko Ogresta.

She enjoys returning to Sarajevo with her plays and films. In 2009, she made her first takes in Sarajevo for The Storm, a film by Hans-Christian Schmidt featuring Kerry Fox and Anamaria Marinca, and in 2020 she returns to Sarajevo to shoot Focus, Grandma, produced by the Sarajevo Film Festival and directed by Pier Žalica.

Srdan Golubović is a prominent actor and film director. Born in Belgrade in 1972. his first feature film Absolute Hundred (2001) screened at festivals such as Toronto, San Sebastian, Pusan and Rotterdam, winning a great number of awards. His second film The Trap (2007) had its international premiere at the Berlinale Forum and was selected in Toronto and Karlovy Vary. It went on to win 22 international awards and made it to the final shortlist for the Academy Award for Best Foreign Language Film. His third film Circles (2013) premiered at the Sundance Film Festival, winning the World Cinema Dramatic Special Jury Award, and screened at the Berlinale Forum, winning the award of the Ecumenical Jury. His newest film Father (2020) premiered at the Berlinale Panorama, winning both the Audience Award and the Ecumenical Jury award. He teaches film directing at the Faculty of Dramatic Arts in Belgrade.

Head of industry and training projects of the Morelia Film Festival, Mexico, Andrea Stavenhagen completes Sarajevo’s Jury. With a History degree, she began her professional career at the Short Film department of the Mexican Film Institute and then at the Research and Dissemination area of the Centro de Capacitación Cinematográfica, one of the most important film schools in Mexico. Always seeking to support the development of young filmmakers from an integral perspective, Andrea has focused her work towards training and professional updating activities, as well as the management of diverse promotion and exchange programs in the context of international events and film festivals.

For ten years she was head of the Ibero-American Film Co-Production Meeting at the Guadalajara Festival and co-directed the Morelia Lab Workshop, a fundamental initiative for Latin American producers in the framework of the Morelia Film Festival, where she is currently head of industry and training projects. Between 2015 and 2019 she was San Sebastian Festival’s Latin American Delegate and she is currently a member of the expert committee at the same festival’s Europe-Latin America Co-Production Forum. Her experience and knowledge of the region’s young cinema have allowed her to actively collaborate in the programming of the San Cristóbal de las Casasfestival, as well as participating as a teacher, adviser, or jury member at national and international film events.