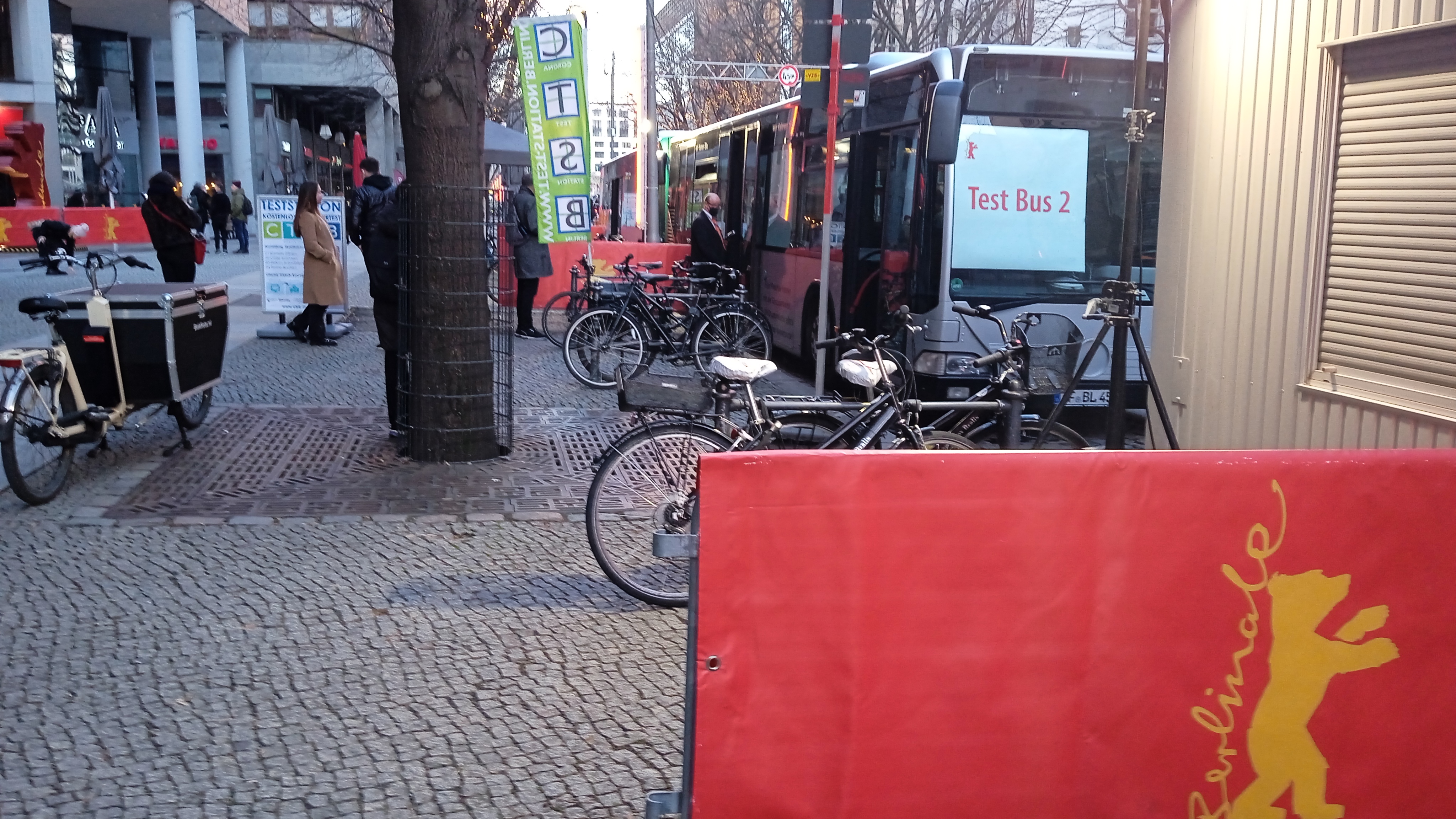 Do all the COVID-19 measures make Berlinale safe event?

Yesterday, Sunday, February 13th, audiences and guests of Berlinale had the opportunity to attend the world premiere's of two new competition programme films: Call Jane by Phyllis Nagy and Return to Dust by Li Ruijun. Yet it wasn't as quiet a day as it might seem by the film premieres as well as accompanying events.

The first noticeable sign of "a change" was at the first screening of the day. Right before the film a location manager/ cinema worker walked in and verbally gave instructions to keep on the masks during the screenings, that fire escape exits are mandatory to use at the end of the event etc. As the screening ended it became obvious that people on the streets and media were also buzzing regarding the COVID regulations. So what was happening?

From around 2,700 COVID tests that were carried out by Saturday evening (February 12th) in festival testing buses, around 50 people tested positive. Some of them arrived at the festival with their fellow film crew, others of course had at least some contact with other guests and co-workers. Although at the moment it might not sound as much of a big deal, the Berlinale team is still doing its best when it comes to preventing the spread and making the event as safe as possible.

A statement from the festival said:

“To stop possible chains of infections we are evaluating every case and situation thoroughly, tracking all contacts and identifying possible risk situations. We are still in pandemic times and obviously, positive tests are still a reality in our daily lives.”

What didn't help the situation and brought a little unrest to the audiences were anti-Covid mandate protests that were held around the Postdamer Platz. Protesters were opposing Germanies legislation approved in December last year that will require health and care workers, such as staff at hospitals and nursing homes, to be immunised against Covid-19 by March 15.

Despite the mild restlessness and agitations that day 4 of Berlinale brought, it still was a great day when it comes to films! Previously mentioned Return to Dust by Li Ruijun carried the audiences to tears and melancholy with its glorious looking slow-pace rural slice of life story.

Director Ruijun brings to the big screen a poetic story of abused, childhood traumatised Guiying and her newly wedded, aged hard-working peasant spouse Ma. Return to Dust observes the life of the duo from the moment of their arranged marriage meetup, over the first days of wedlock in a half-ruined abandoned house, until the point where the couple eventually has a home built by their own diligent hands. Ruijun takes its time to build up the characters showcase the changing of seasons, thoughts, the relevance of patience and the importance of time.

As the film has the "dragon" seal of approval from China's State Administration of Press, Publication, Radio, Film and Television the question rises, did Ruijun plan to shape his work in this direction? Throughout the film, several scenes present the stark contrast between the Ma/Guiying's life of poverty on one side and the life of leaders of the local community(as well as rich landlords) that don't get the value of money and don't mind spending it on themselves while hustling villagers.

Maybe this is best noticeable as the film introduces local bigwig Zhang Yongfu that needs blood and nobody except Ma has that needed blood type bringing the members of these two different worlds to clash, have a chance to see and understand each other, or at least try. Yet, draining the blood from the old Ma, low wage pays to the village workers, confrontations and dealing with the trauma are pushed to the background of this film to make more place to show the value of hard work, how it pays off etc.

Melancholy, brutality or honesty as the closure of the film?

The ending does a bit "romantic fuck you" vibe by giving the viewers the harsh and brutal closure that doesn't redeem the splendid prior story, neither does it push a strong enough message of the agitated bourgeoisie, filthy rulers and their petty subjects. Yet again, it exactly fits the pace, position and mindsets of characters and makes it feel so real in its misery of unpretentiousness, toughness and unfairness of life.